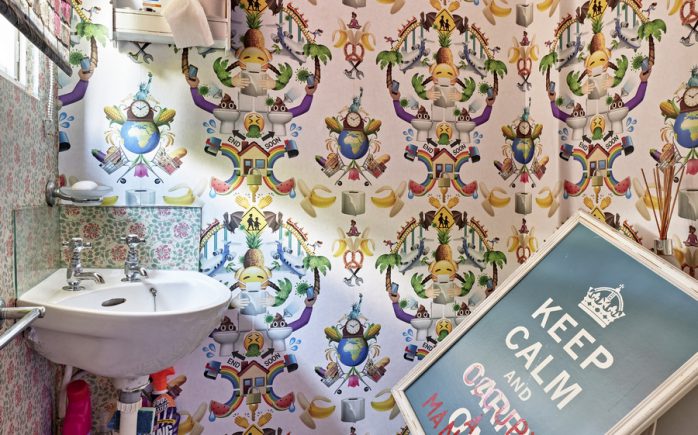 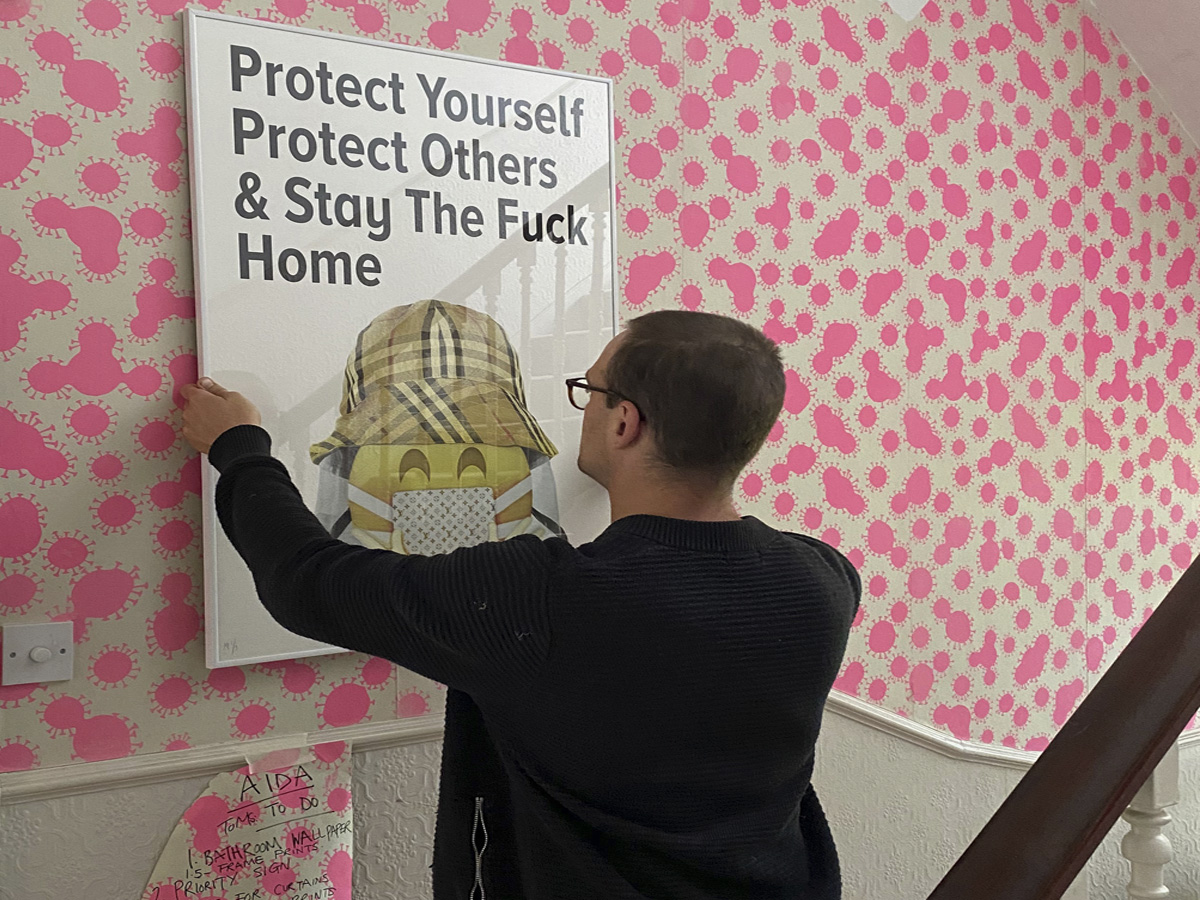 Aida Wilde ©[/caption] Slogans on the walls mention ‘99% ARE IN THIS TOGETHER’, ‘STAY THE FUCK AT HOME’ with an hug Emoji wearing a Burberry hat and a LV protective mask (a reference to luxury brands announcing that they would produce non surgical masks and protective equipment for frontline workers). The ‘Pandemic Mausoleum’ is adorned with a site-specific wallpaper, based around a traditional 16th century Damask fabric. Patterns include Emoji’s that tells the capsule story of the pandemic (covid-19) with elements ranging from bats (which many believe was the source of the virus) to masked toilet roll hugging head, palm trees, joggers, rainbows, a house in lockdown, post boxes and not forgetting clapping hands ‘for our heroes”. The lino floor has been covered with ‘FEAR LESS / LESS FEAR’ [caption id="attachment_346230" align="alignnone" width="3072"] 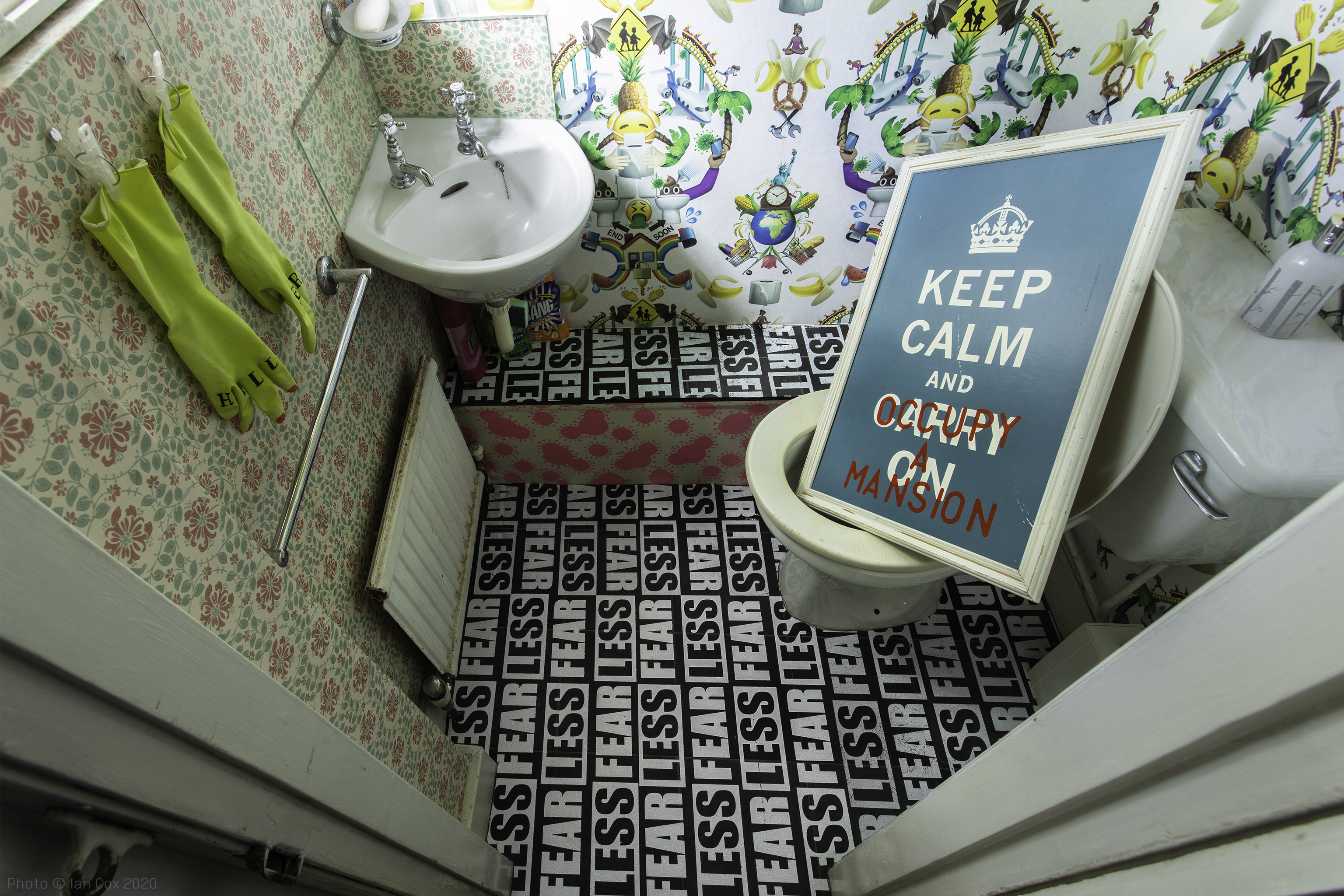 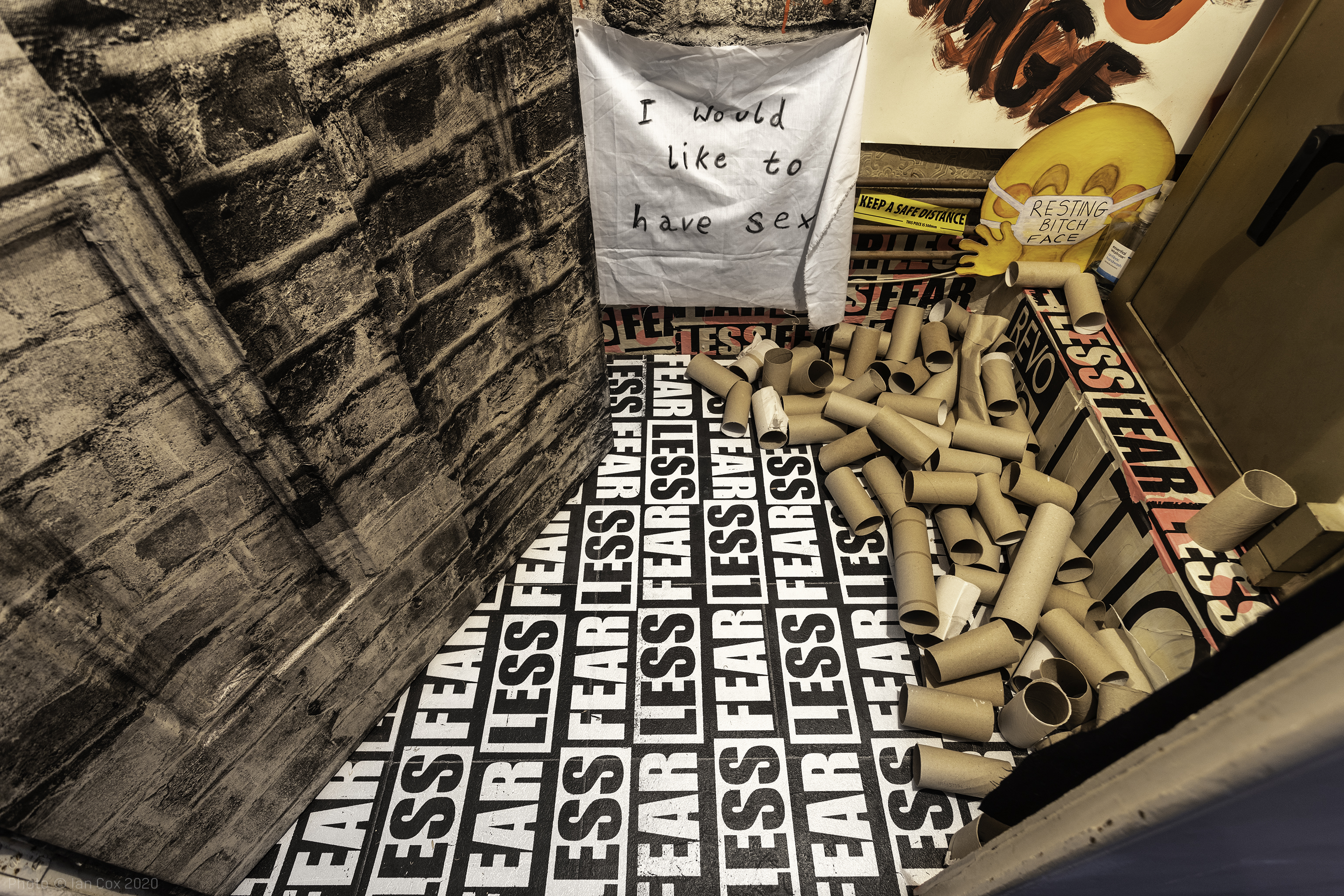 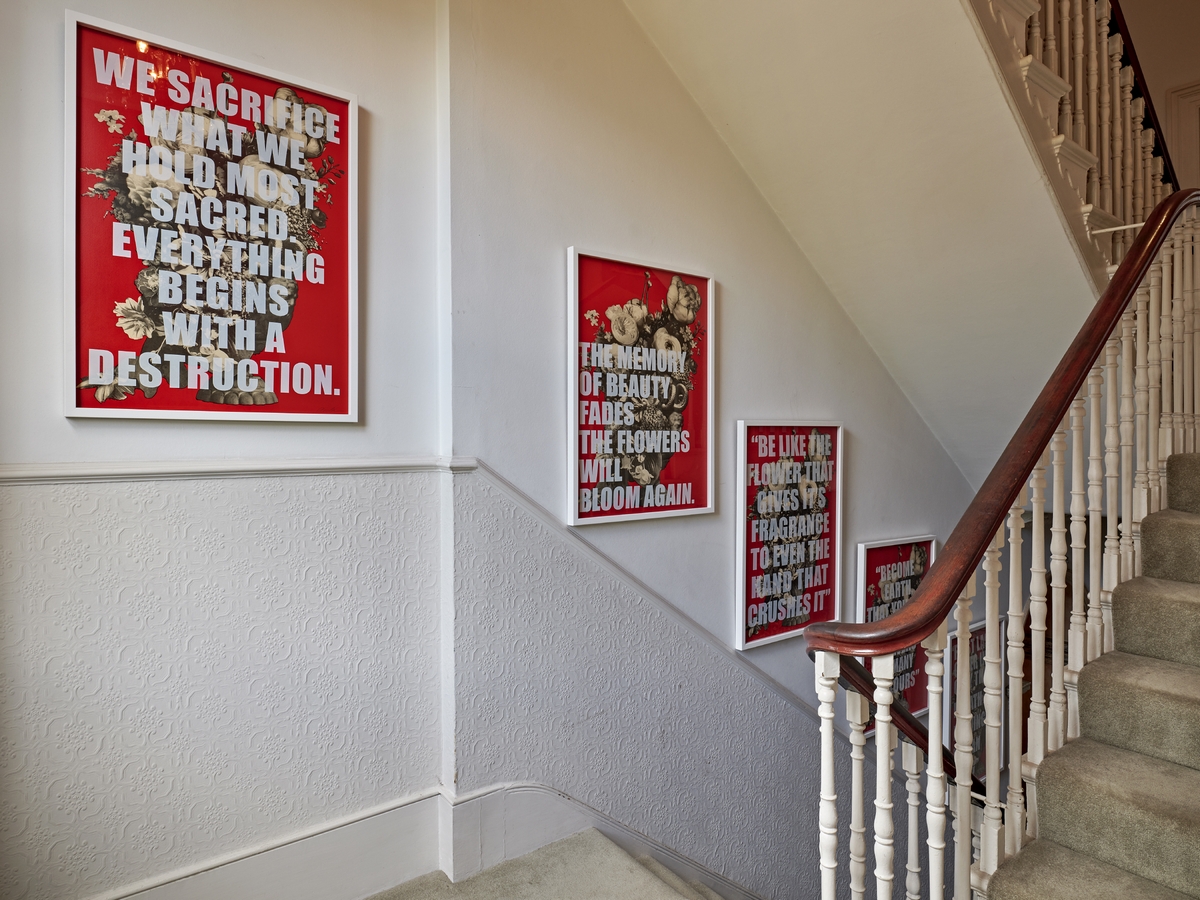 Aida Wilde © Nick Smith[/caption] Aida Wilde also created specific paraphernalia: ‘Covid 19 Germ Warfare’ Tshirt and face masks are an ode to Keith Haring’s 1987 “Aids Is Political- Biological Social (Germ) Warfare” slogans. Various comparisons/similarities can be made between the two epidemics in terms of the hysteria attached to it, who and what is targeted (specific demographics/ race/ gender) eg. Black Men are 4 times more likely to get Covid 19 and more men have contracted the virus than women. The T-shirt is displayed inside a vacuumed sealed bag to further enhance the message of being “Germ Free- Dust Free” that is all illuminated by UV lights to further represent the annihilation of even more germs. Playing with UV light, the viewers can read 'The powerful are powerless against the invisible' . Close to the T shirt display, a series of Baskeball caps ‘Make the world covid free again’, are inspired by D. Trump’s infamous red ‘ Make American Great Again’ and his announcement that wearing a hat could protect from the virus. [caption id="attachment_346224" align="alignnone" width="1200"] 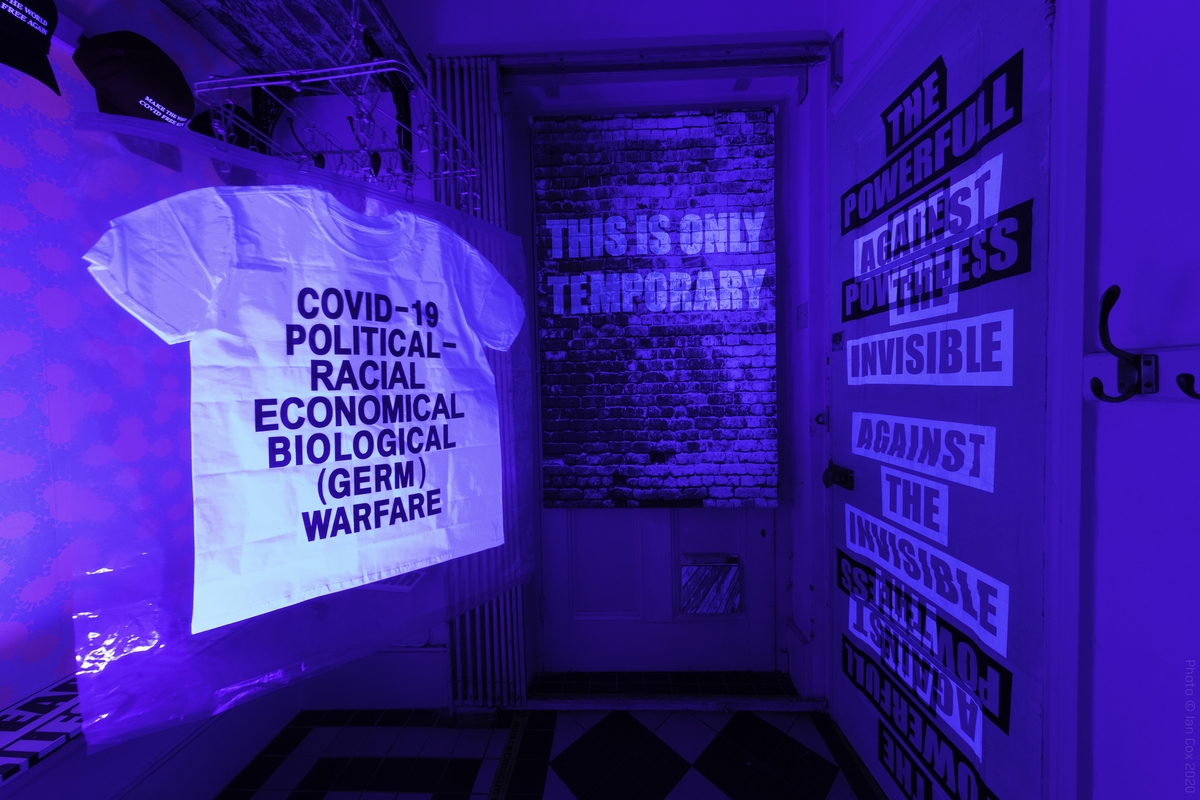 Aida  Wilde © Ian_Cox_2020[/caption] In an adjoining room, Aida Wilde transformed a notice road sign to reflect the ‘Changed priorities Ahead’ since the lockdown has slowed a lot of people down and forced them to reassess their priorities, from the daily exercise to observing nature. [caption id="attachment_346218" align="alignnone" width="1200"] 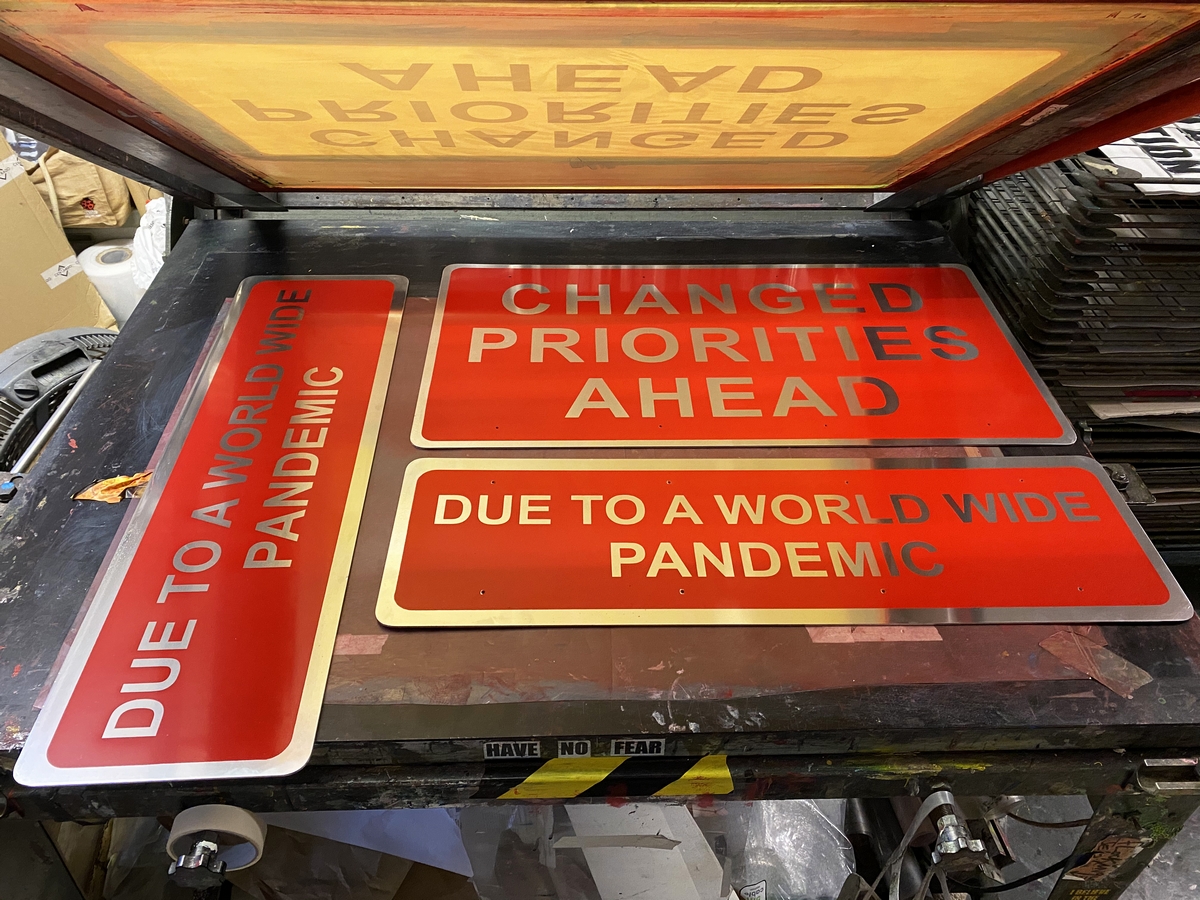 Aida Wilde ©[/caption] Curtain lace banners ‘Notes From A Phantom’ display writings/poems and call to action that occurred during the UK lockdown in collaboration with Minneapolis based artist Ego Ahaiwe Sowinski. The two pieces with their gray texts are screen printed onto black lace, reminiscent of traditional face coverings in mourning and are a reference to the unlawful murder of George Floyd in the US and the Black Lives Matter protests that took place subsequently after the killing. They speak about the importance and the power of Stillness and Silence from the maddening world around them. [caption id="attachment_346227" align="alignnone" width="1200"] 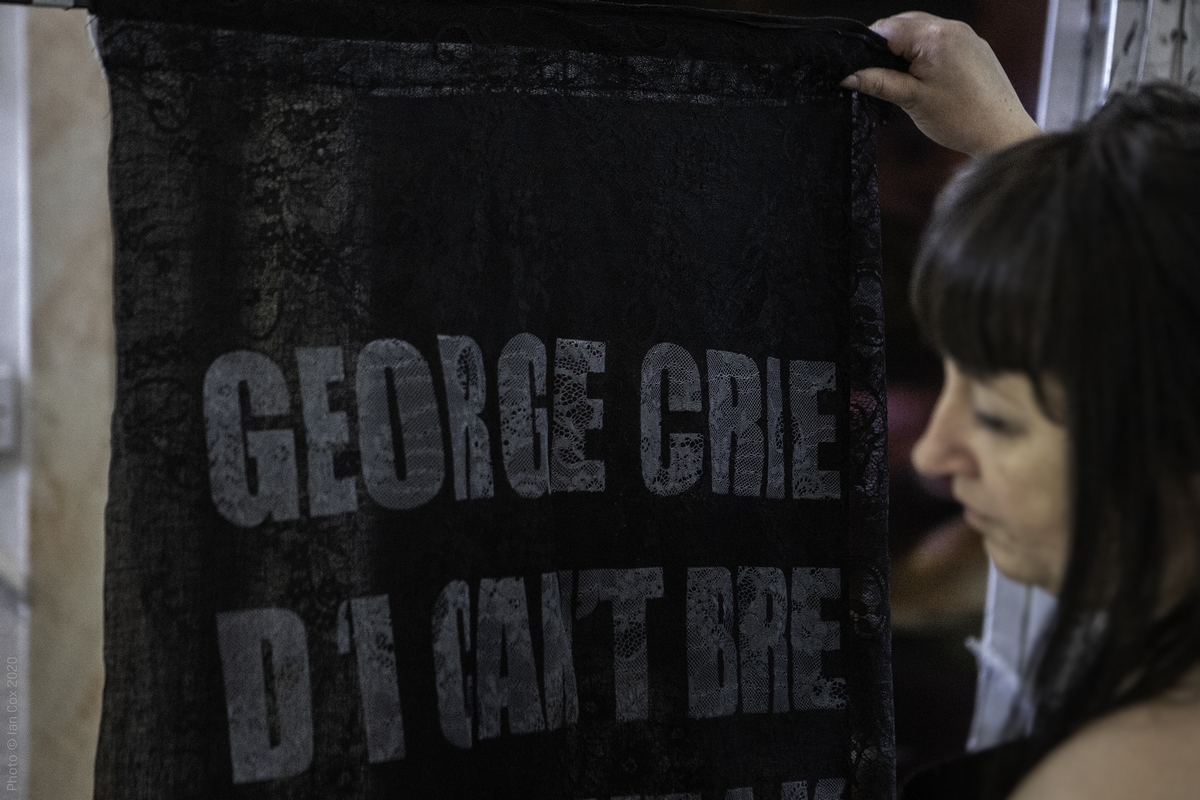 Aida Wilde © Ian_Cox_2020[/caption] In a nearby hallway, Mr Cenz’s work expands the ordered patterns and colours from the house’s tiled floor into a fantastical blend of photorealism, illustration and graffiti lettering, reflective of his many street works which decorate the city of London. [caption id="attachment_346210" align="alignnone" width="1200"] 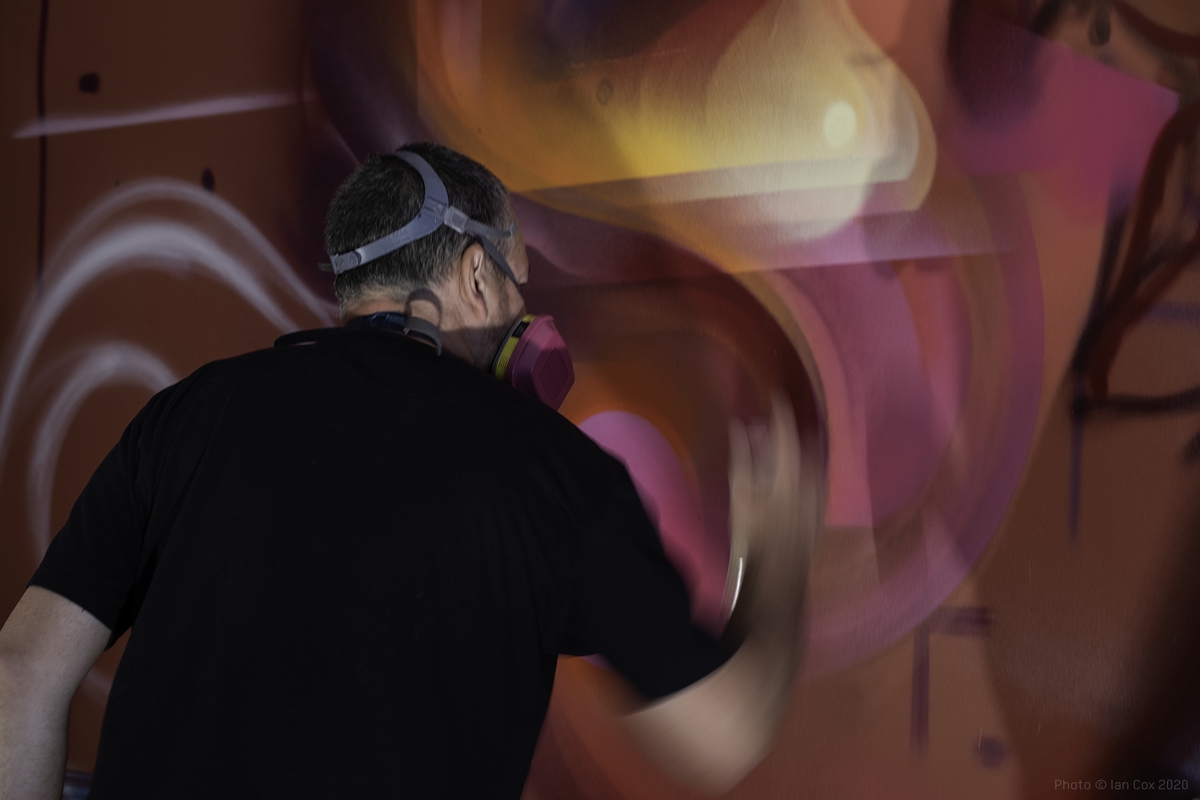 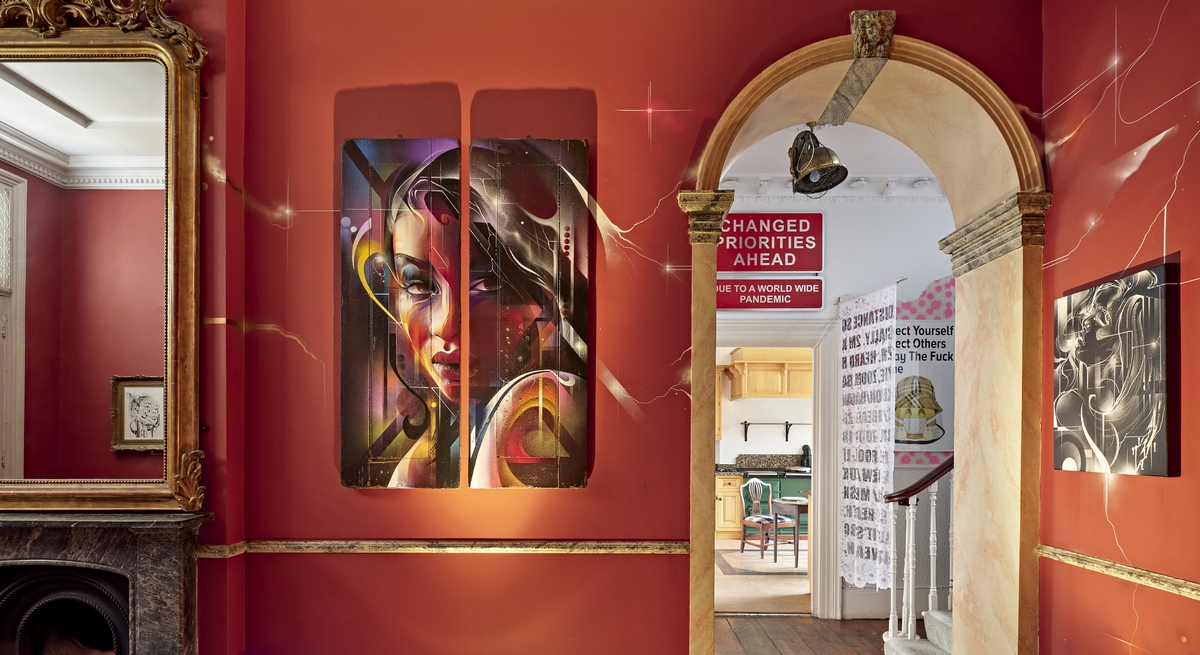 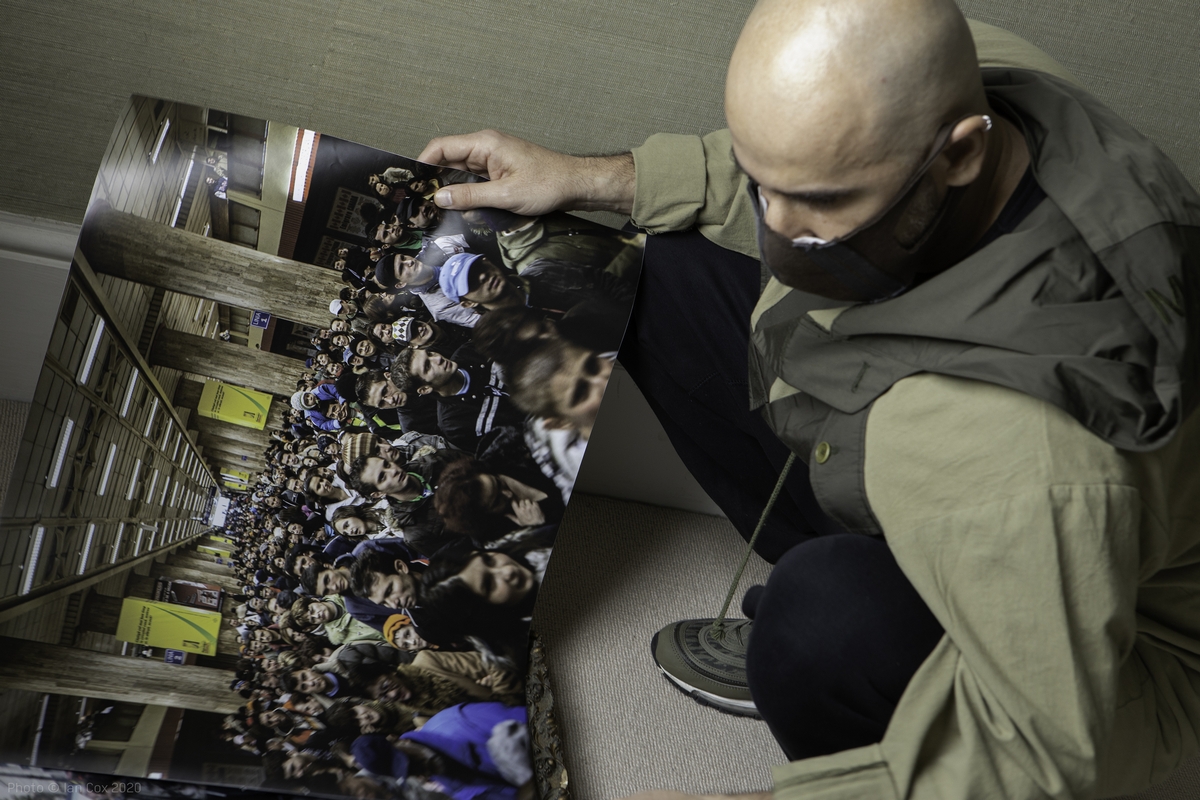 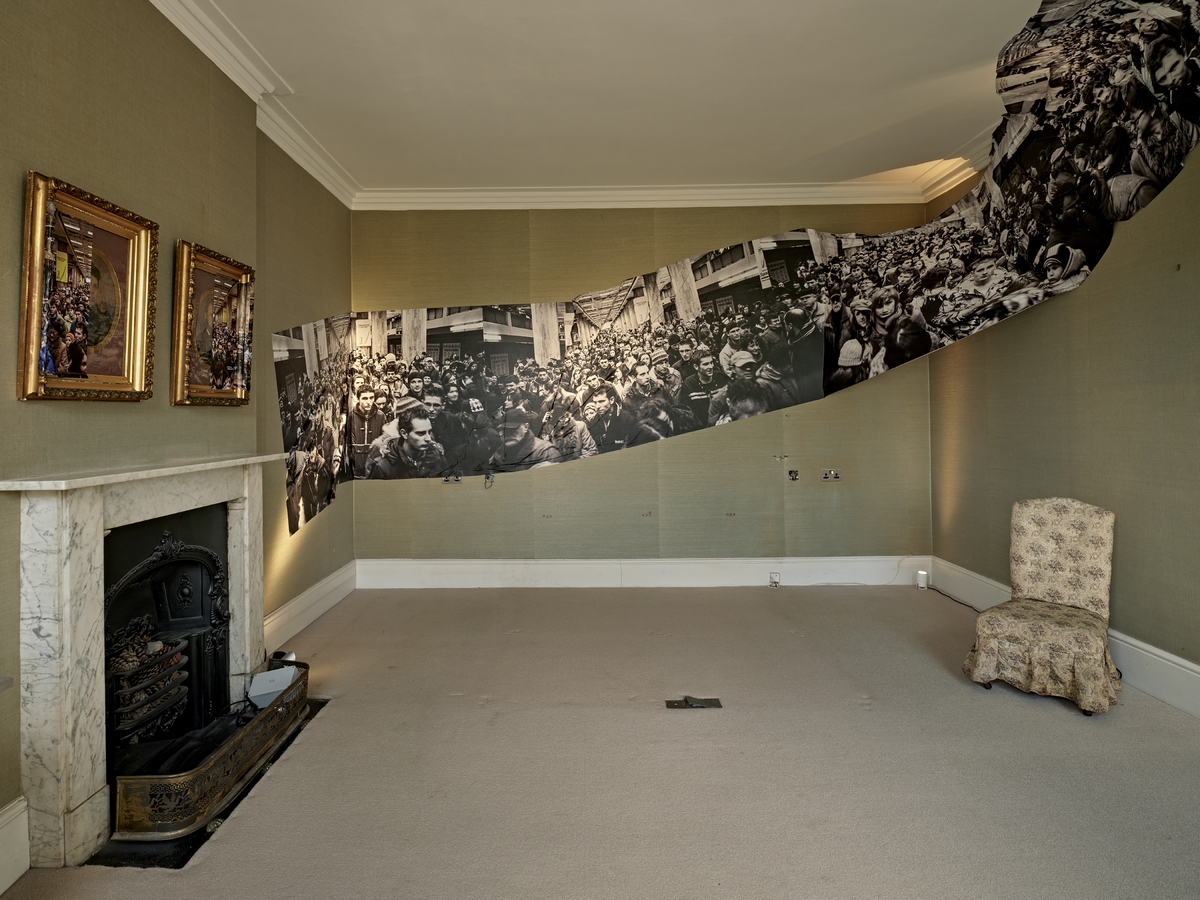 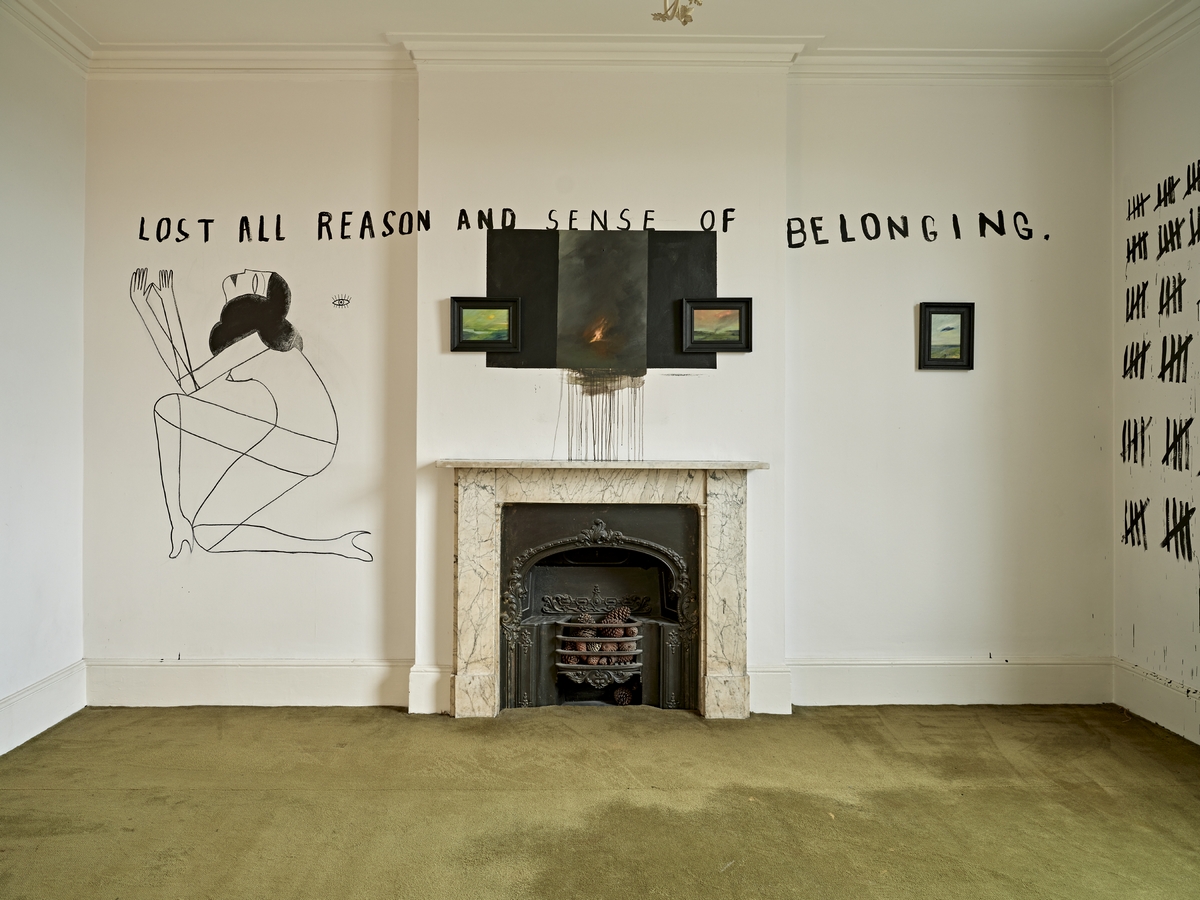 David Bray © by Nick Smith[/caption] Due to the pandemic, some of the artists have created their artworks remotely: Portugese artist Vhils transformed the house’s library doors from his Lisbon studio using his bas-relief carving technique. [caption id="attachment_346202" align="alignnone" width="1200"] 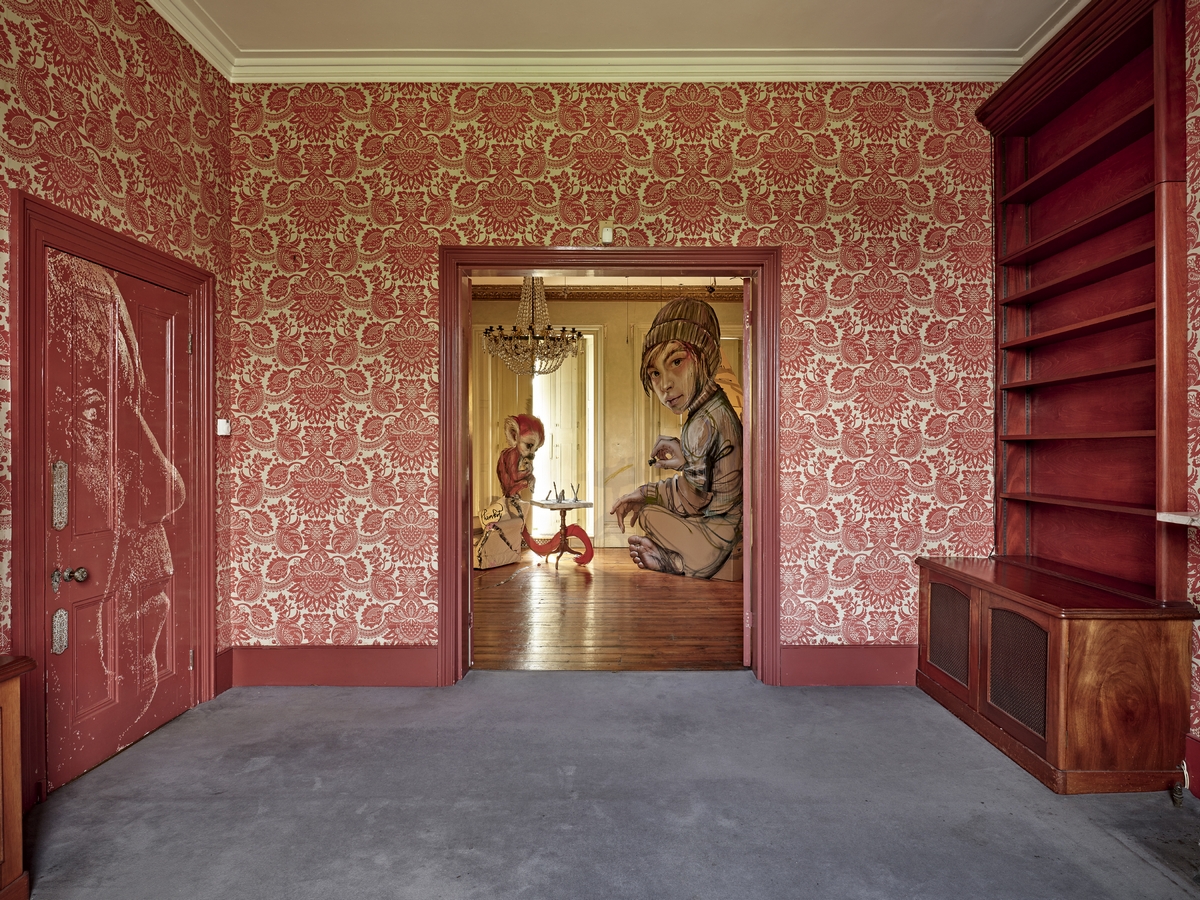 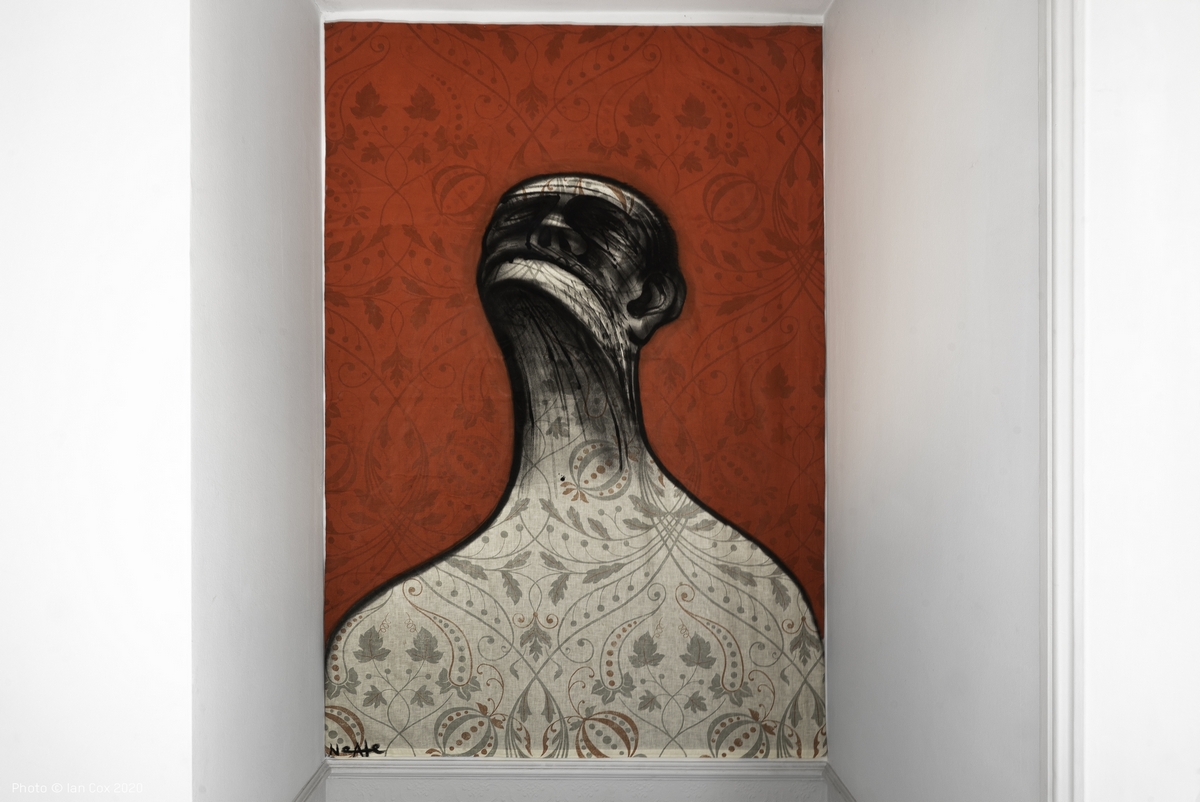 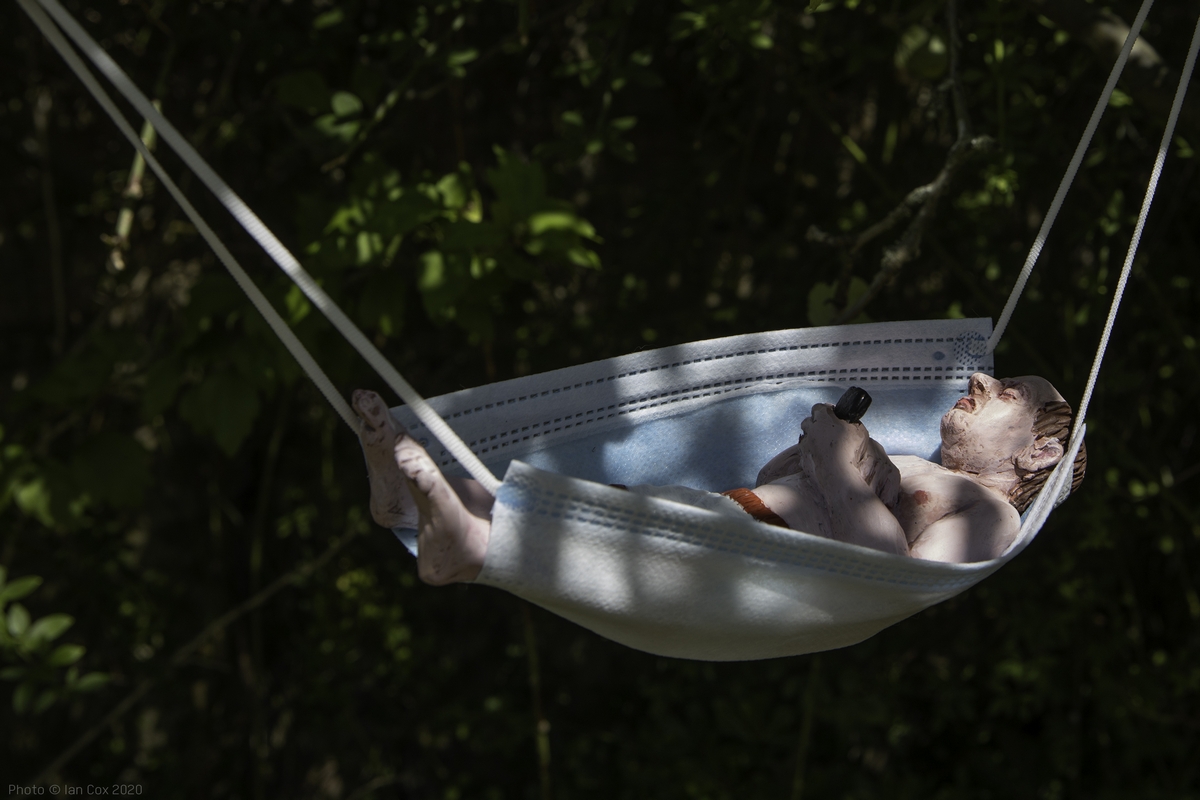 Isaac_Cordal ©_Ian_Cox_2020[/caption] Brothers Icy & Sot’s kitchen-based installation is modelled on a discarded table found within the house. Titled Socialism vs Capitalism (2020), the folding table is now complete with two folding table places: the plates and cutlery split and hinged so they too move with the tabletop. The work reflects on the often-debilitating effects of capitalism on the poor, here represented through the most basic of human needs: food. [caption id="attachment_346204" align="alignnone" width="1200"] 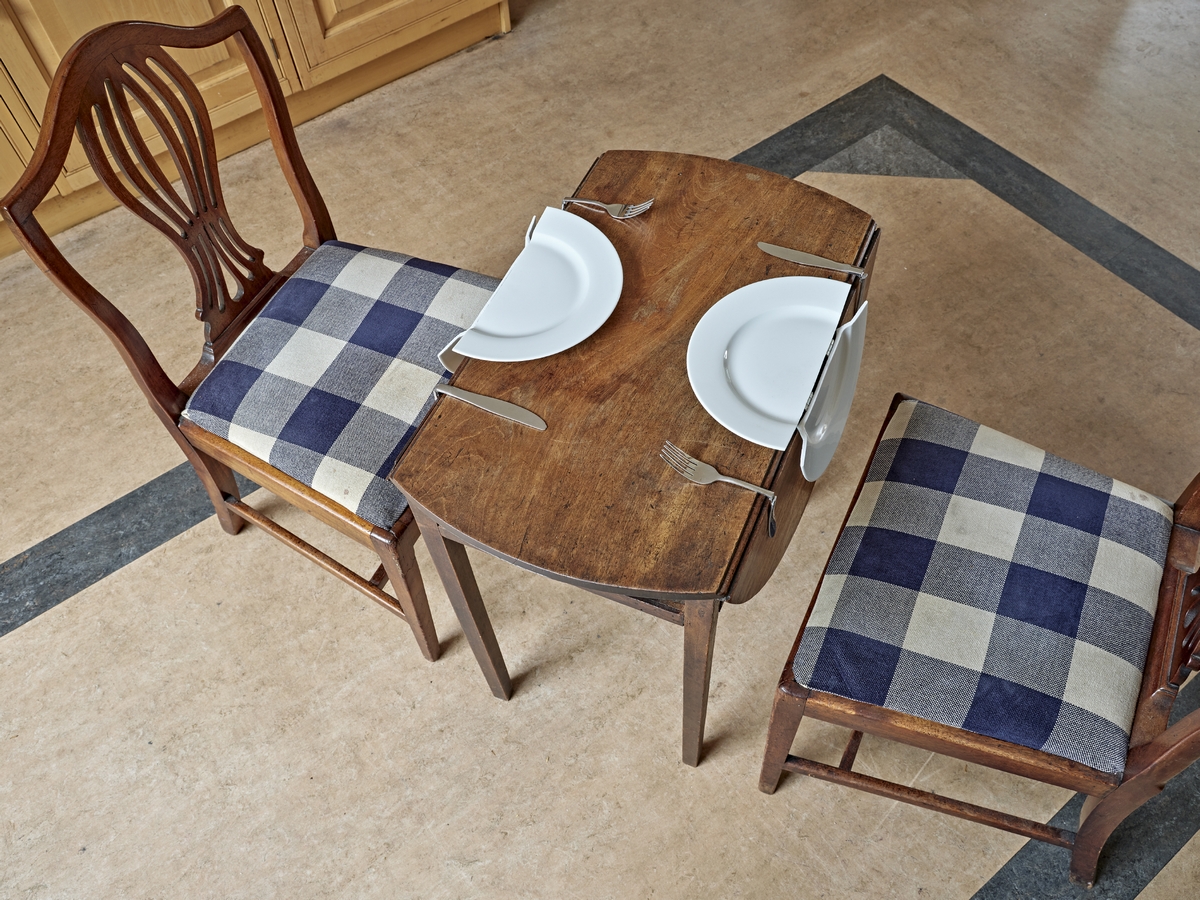 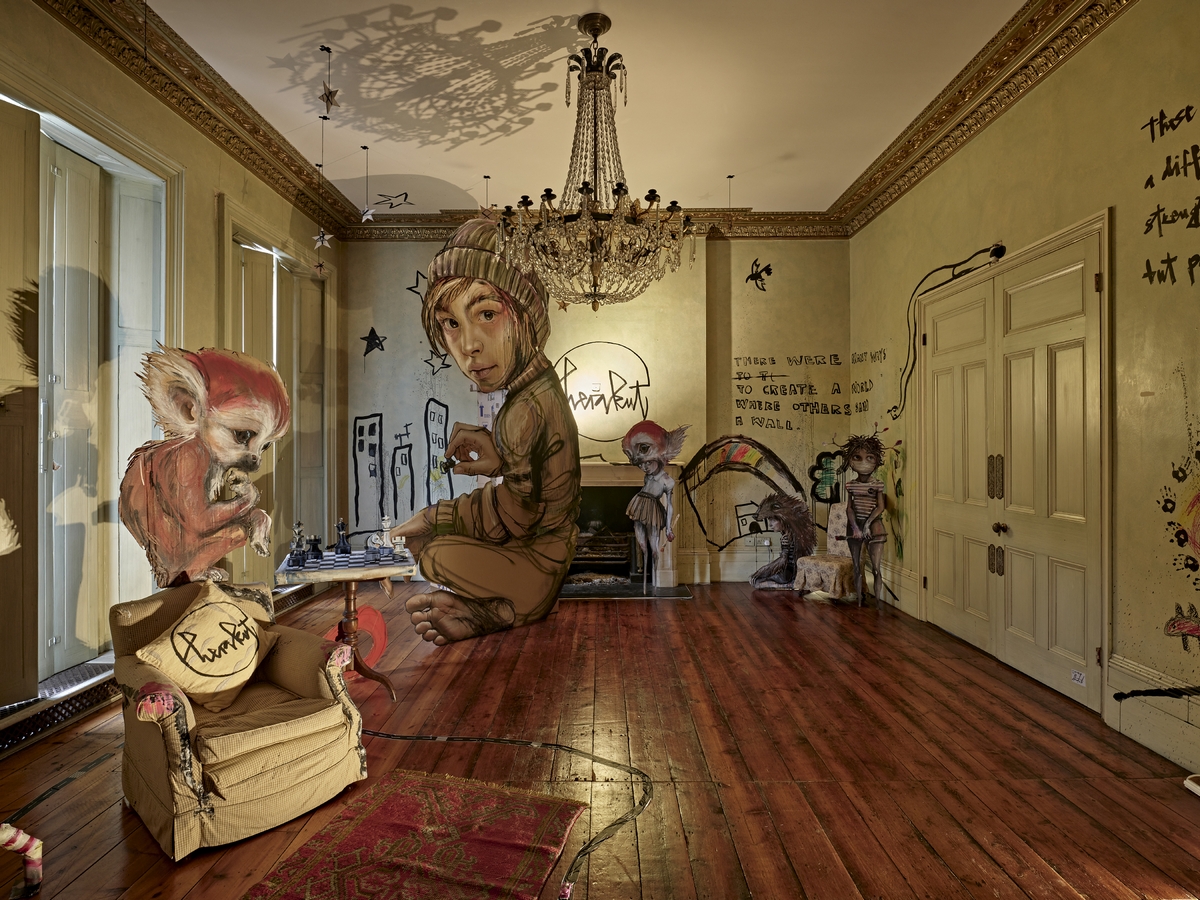 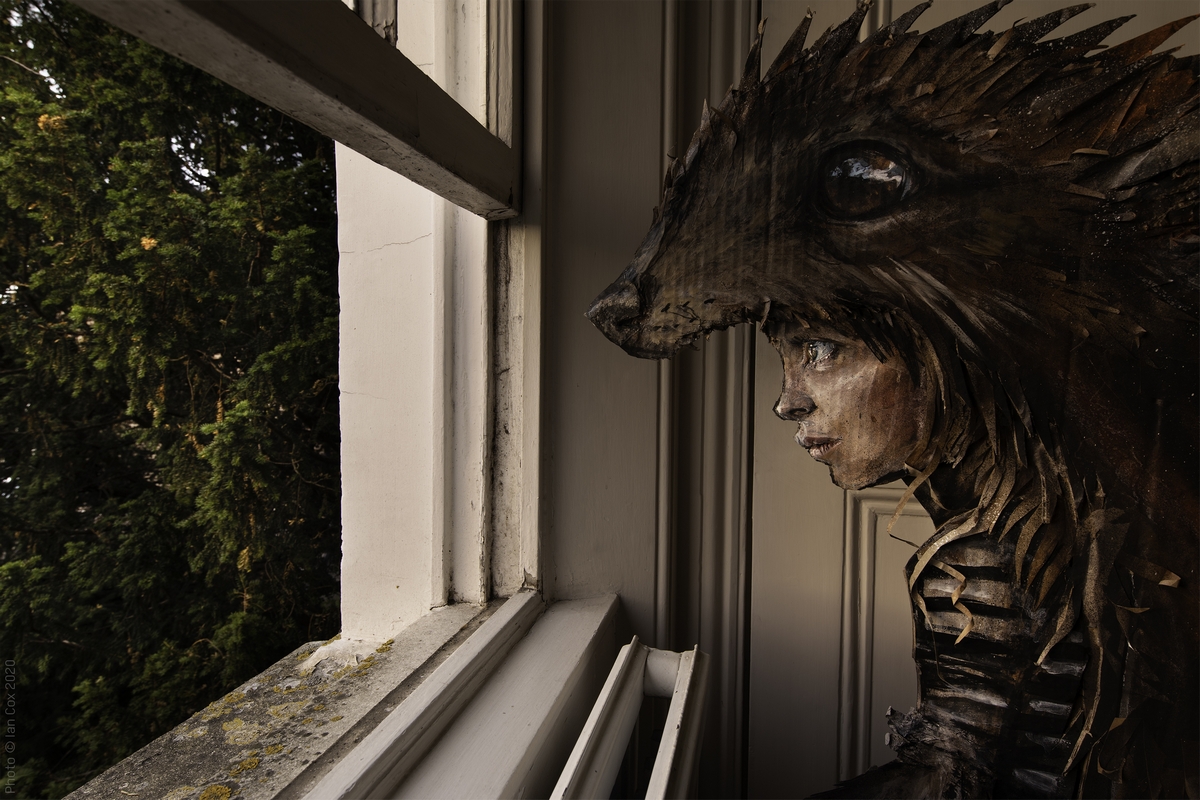 Herakut ©Nick Smith[/caption] ZOER’s piece A Case Study of a House (2020), presents an anamorphic installation created through ‘barricade’ of domestic objects and furniture stacked within the space. Highlighting both the reality and futility of partitions, the works symbolise the ‘shield’ of objects and material possessions used to evoke social or emotional ‘distance’ to others. [caption id="attachment_346207" align="alignnone" width="1200"] 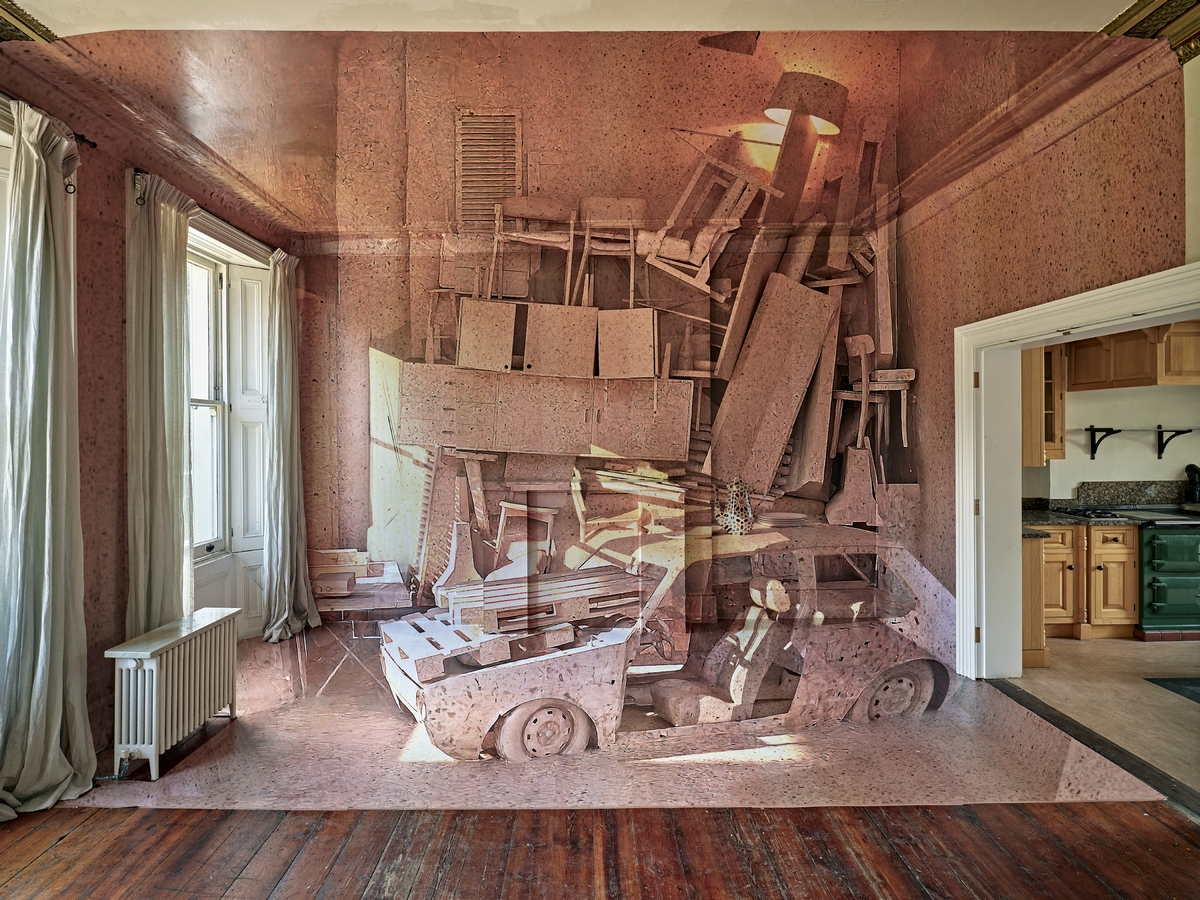 Zoer ©Nick Smith[/caption] You can book free tickets to select time slots to visit the London Victorian Townhouse from 24 July until 24 August.  'disConnect' is also accessible to online audiences, where each work is further activated through an accompanying programme of digital initiatives, including downloadable art works, online videos, virtual tours and an Instagram Live interview series. https://schoeniprojects.com/tickets/