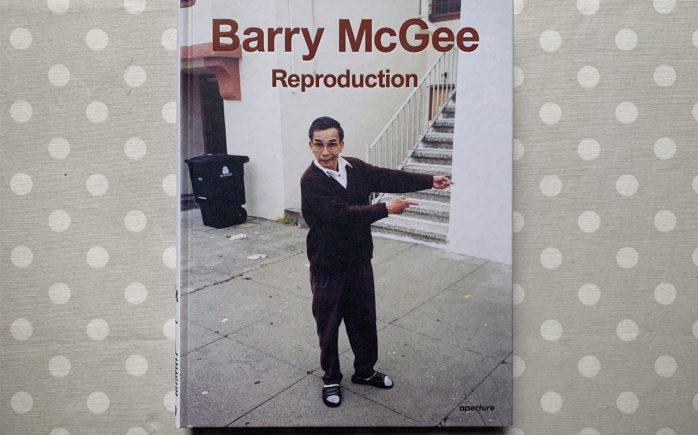 ‘I don’t feel like a photographer’ Barry McGee once confessed. So it’s no small irony that Aperture has just released Reproduction, his first book dedicated exclusively to that medium. The book is printed on a contrasting combination of the kind of thick gloss paper which is familiar to the publisher’s usual fine art photography publications and the thinner matte stock which McGee’s images are more commonly printed on in his many zines.

The book collates just a small number of the many photographs that the San Francisco-native takes to help understand the things that he’s not able to process at first sight. They’re a record of the communities and environments in which he lives and act as the inspiration and source material for much of his studio work. Motor vehicles are a recurring theme throughout the book and we see both the finely-tuned classic cars stored by his father during his childhood and burnt out & trashed vehicles, which are far more reminiscent of the installations in his museum exhibitions. The contents also reflects McGee’s collaborative practice; there are shots of work by his wife Margaret Kilgallen and Boston writer Ryze and even the cover features a photo taken by his long-term friend and assistant Josh ‘Amaze’ Lazcano.

The hardback book runs to 224 pages and, in addition to the regular edition, McGee has designed six different stamps with feature on the title page and spine of special editions available from Park Life in San Francisco, Yvon Lambert in Paris, On Sundays in Tokyo, Dashwood in New York, Arcana in Los Angeles and from the publisher Aperture.