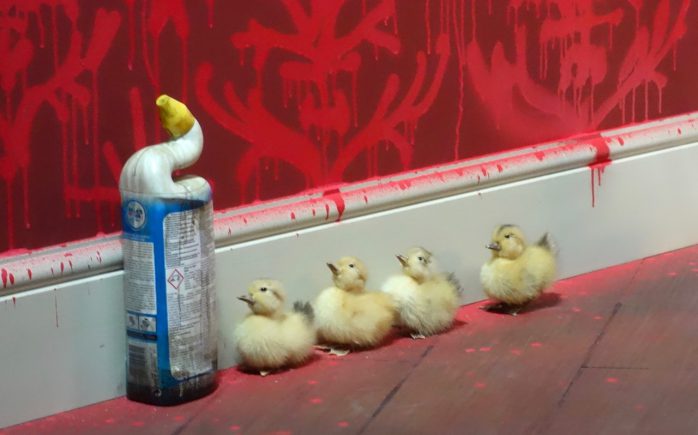 Unless required for work or family reasons, many Londoners balk at the prospect of journeying to the other side of their city. Localism or laziness are often at play. So if you ever wish to check the status of your relationship with a Londoner, there's a simple test we believe is about 50% reliable: In case that person is based in West London, suggest meeting up for drinks in East London (or vice versa). And if they live north of the River Thames, invite them to a venue in South London (or vice versa). Afterwards, you may decide that one name on your 'Friends List' needs to be relegated to the 'Acquaintances List'. While plenty of artists have loyal followers, there aren't many who could repeatedly persuade their fans to travel — especially to unfamiliar, out-of-the-way destinations. Banksy, however, has consistently been able to get people trekking. This is testament to a crowd-pulling ability that seems unique in the art world. Which other artist could coax their supporters to visit places including Bethlehem (Santa's Ghetto 2007; Walled Off Hotel 2017–present), Weston-super-Mare (Dismaland 2015), and now Croydon? As covered here a few days ago, the homewares store called Gross Domestic Product™ is Banksy's latest enterprise. Its closed-door showroom can be viewed from the street "for a few weeks only" at 16–20 Church Street (corner of Frith Road), Croydon. [The limited and unlimited edition products on display will only be available to purchase online via the GDP website. At the time of writing, that site continued to state "Opening soon".] With passports in hand on the night of 2 October, AM ventured south to London fare zone 5 to take close-up photos of Banksy's shop window. Zone 5. Crikey. Surely that must place us on the 'Best Mates List'. 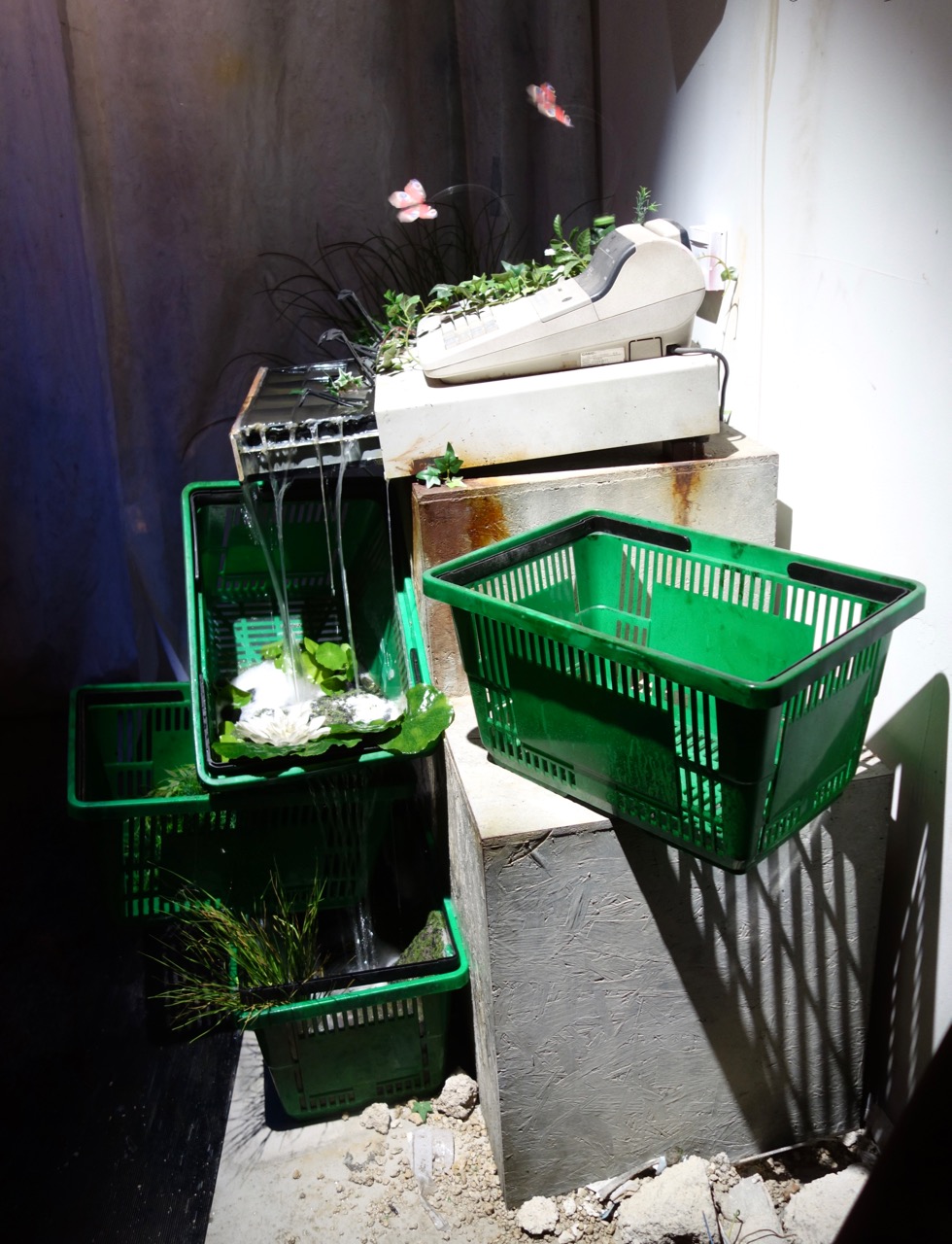 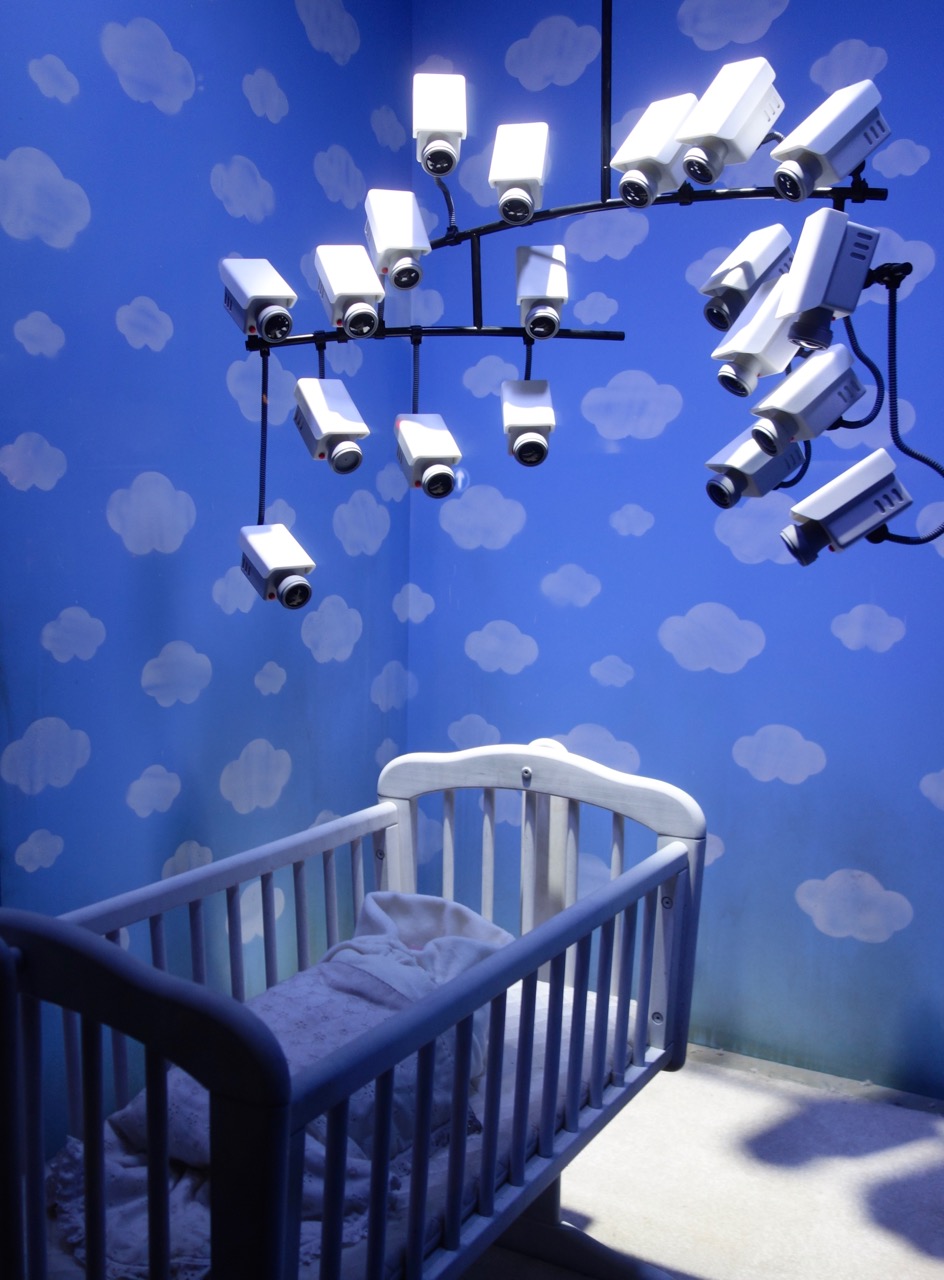 "Baby Mobile — Banksy has created the ultimate ceiling mounted stimulus toy to prepare your little one for the journey ahead - a lifetime of constant scrutiny both state sanctioned and self imposed. Doesn't rotate very well, some self assembly required. Made from toys and metal, resin and wire. Signed. Edition of 3"[/caption]   [caption id="attachment_344606" align="aligncenter" width="1052"] 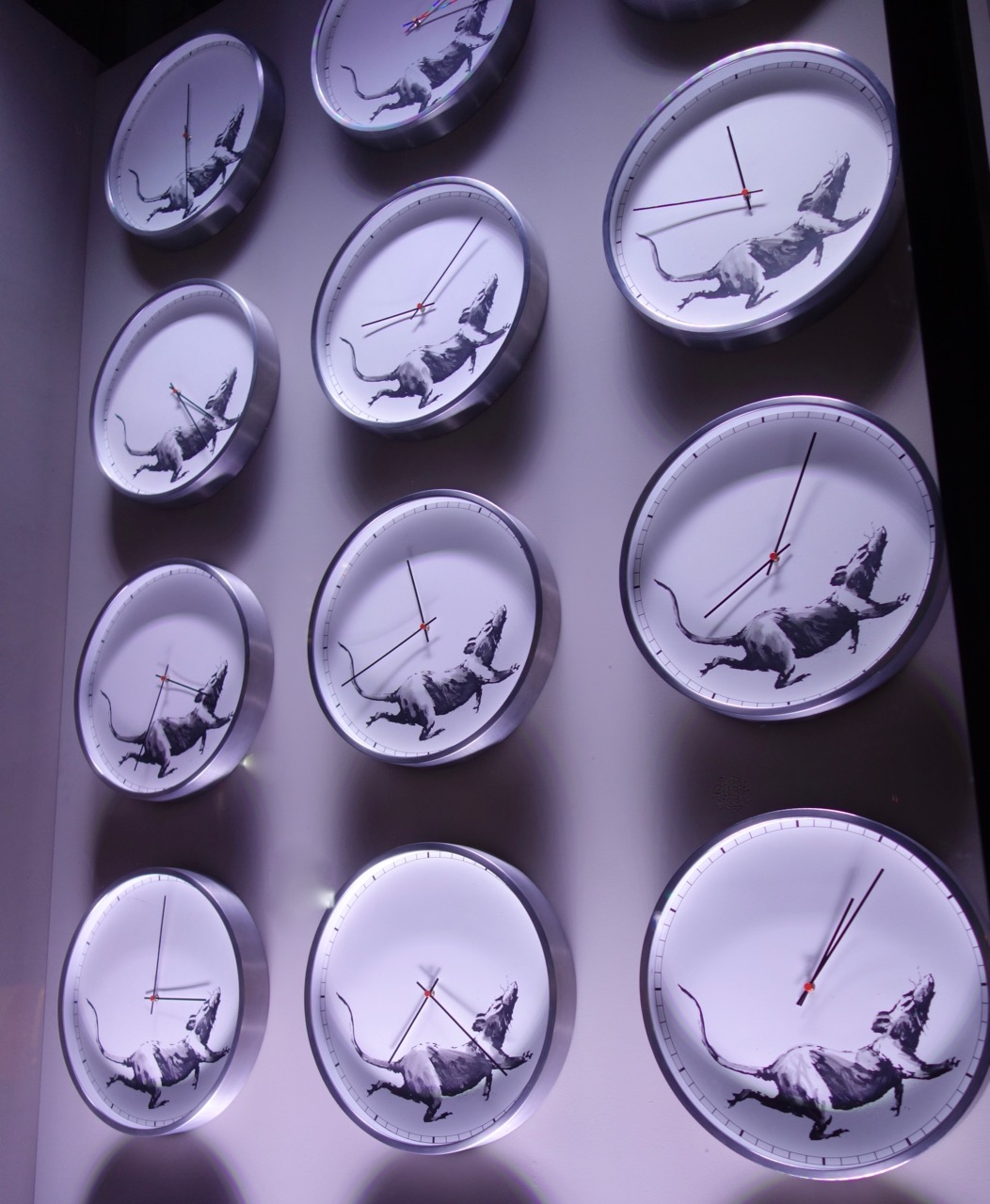 "Clock — Upcycled from an office supplies store, this timepiece features a trademark Banksy rat and is suitable for home, office or Home Office. The precision mechanism requires 1x AA battery to accurately mark our relentless and steady ticking towards the great unknown. Screen printed in black and individually hand smudged. Signed on the reverse. Edition of 150"[/caption]   [caption id="attachment_344605" align="aligncenter" width="859"] 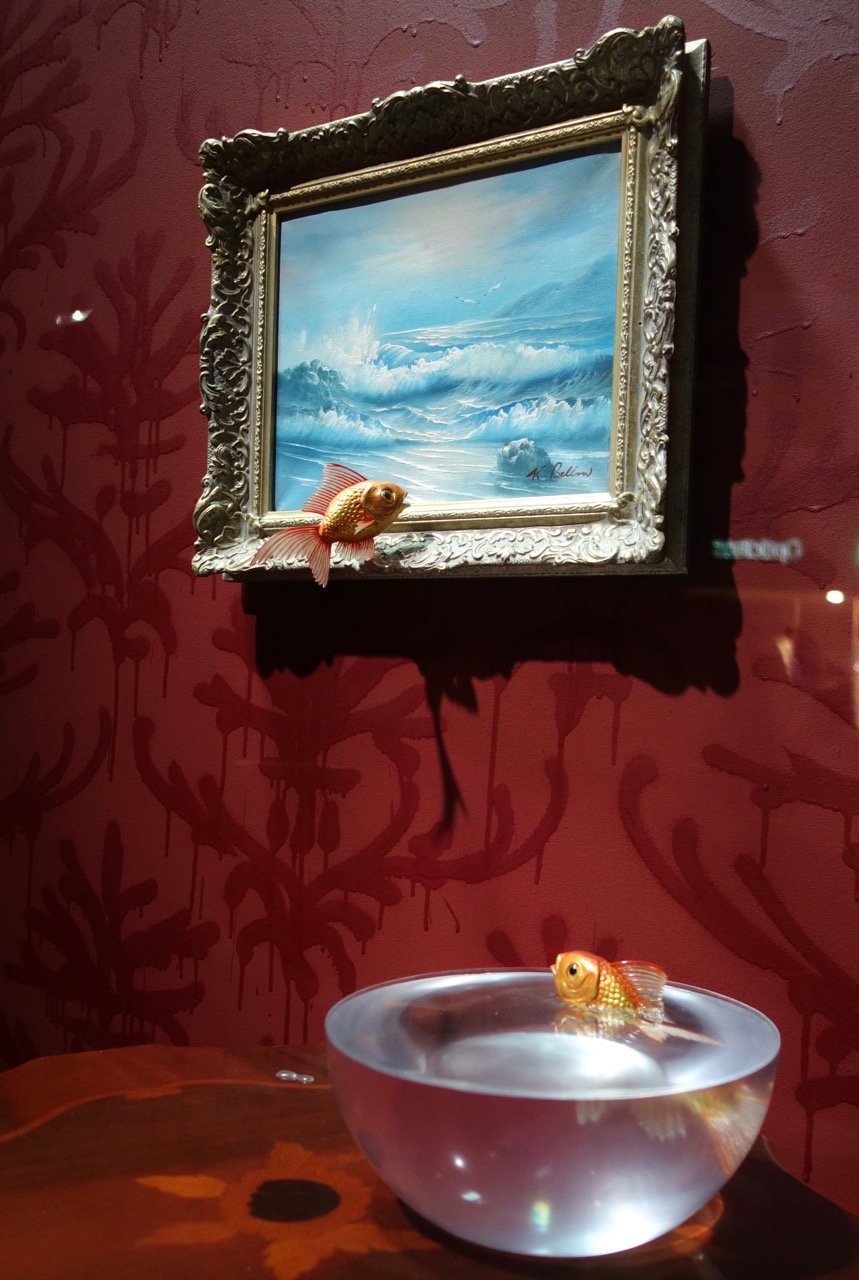 "Goldfish — Are you the kind of person who likes their pets to come inert and table-mounted? Then this is the product for you. The futile persuit [sic] of the unnattainnable [sic] cast in high quality resin. Requires no pump or filters, but includes decorative pot of fishfood. Signed - Edition of 15"[/caption]  [caption id="attachment_344604" align="aligncenter" width="885"] 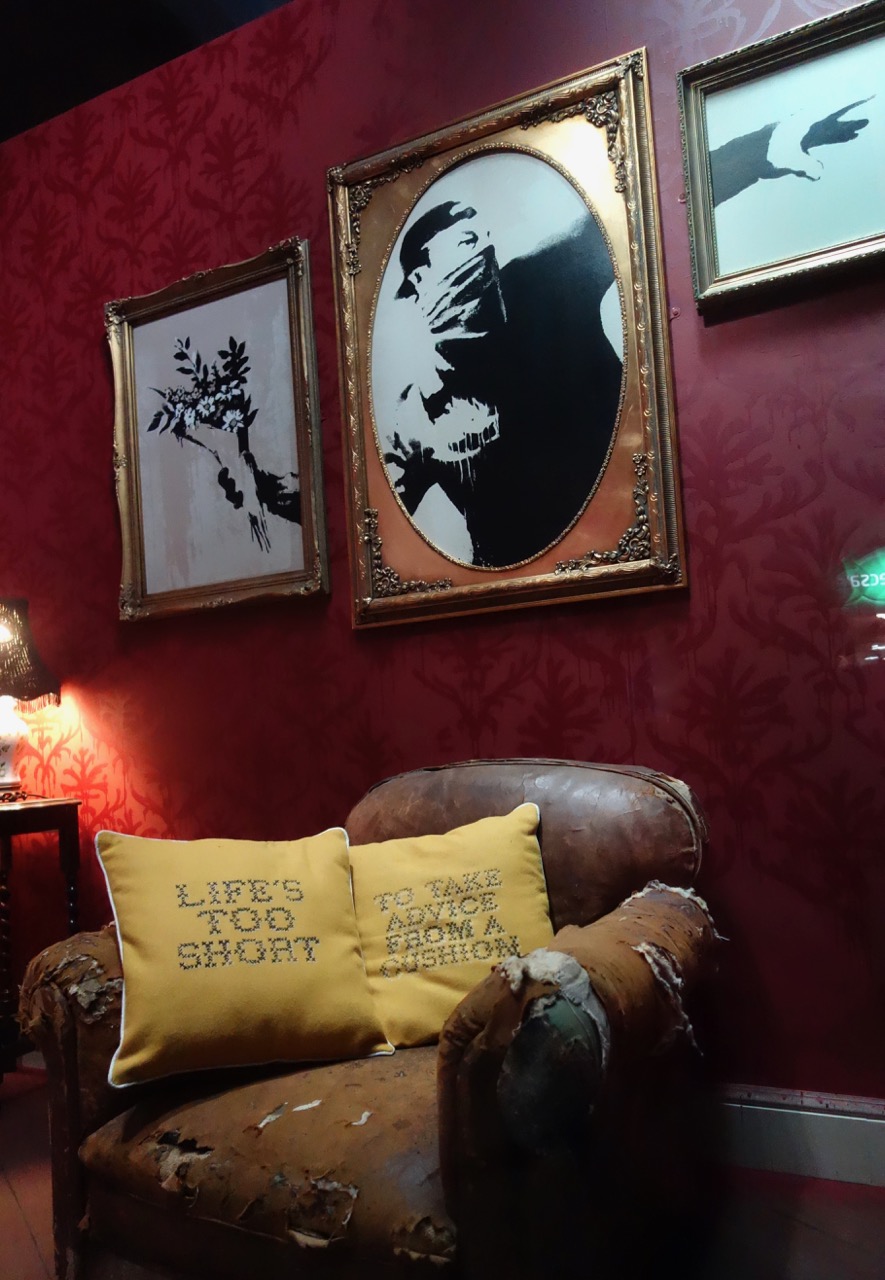 Top: "Thrower — This is Banksy's first experiment with a new technique for making prints - spray the stencil onto processing film and expose the result directly onto a silk screen. This avoids having to use photography or computer manipulation and creates a very accurate analogue representation of mark making. Looks pretty dope, in other words. Comes as set of three signed and numbered. Grey Edition & B/W Hand finished Edition. From an Edition" [Edition size not specified.]
Bottom: "Cushions — Are you fed up with soft furnishings trying to express feelings on your behalf? Then let these stencilled cushions make that clear. They come as a pair but might not match as they're painted on finds from the charity shop. Edition of 50"[/caption]  [caption id="attachment_344603" align="aligncenter" width="1280"] 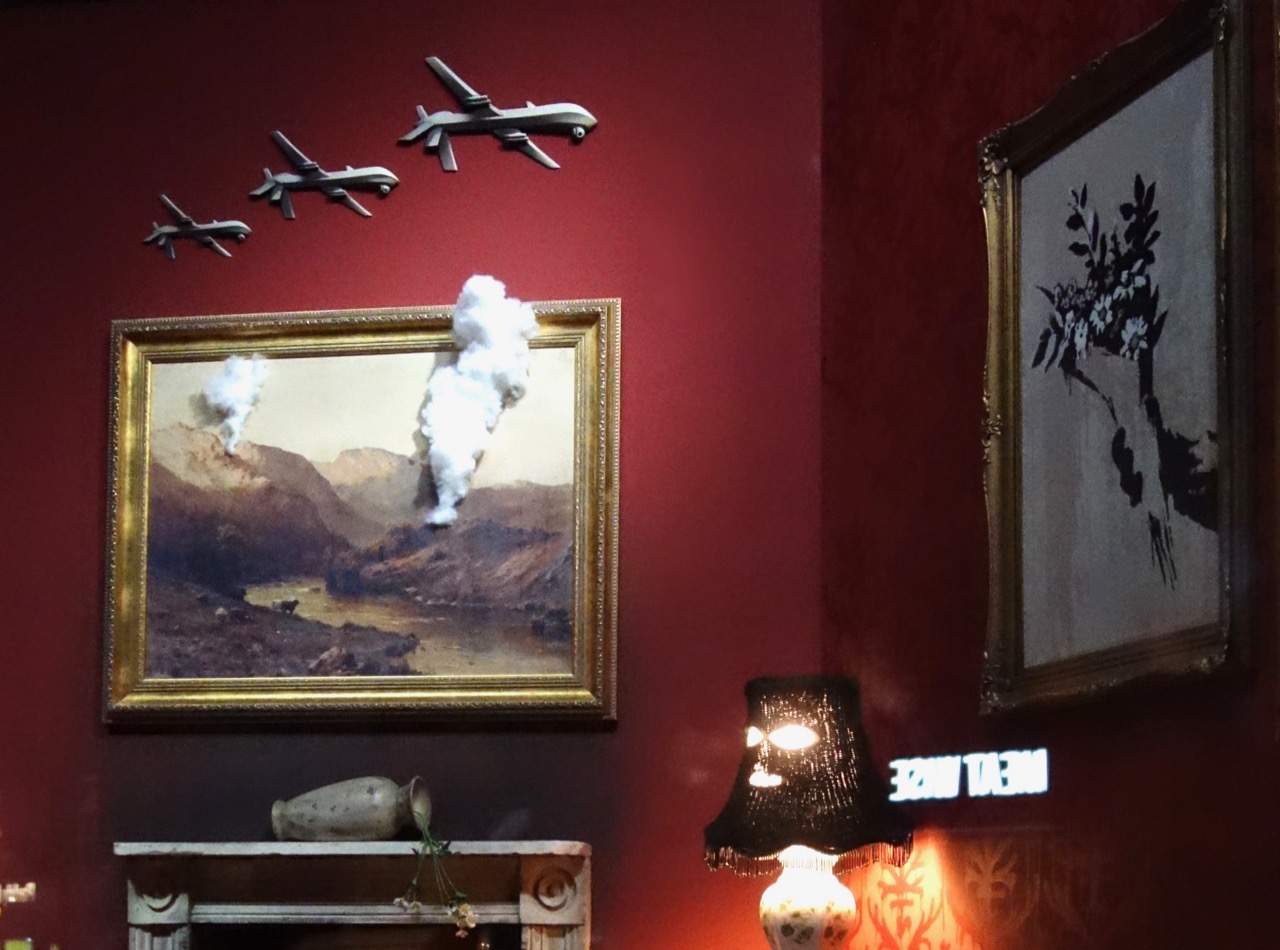 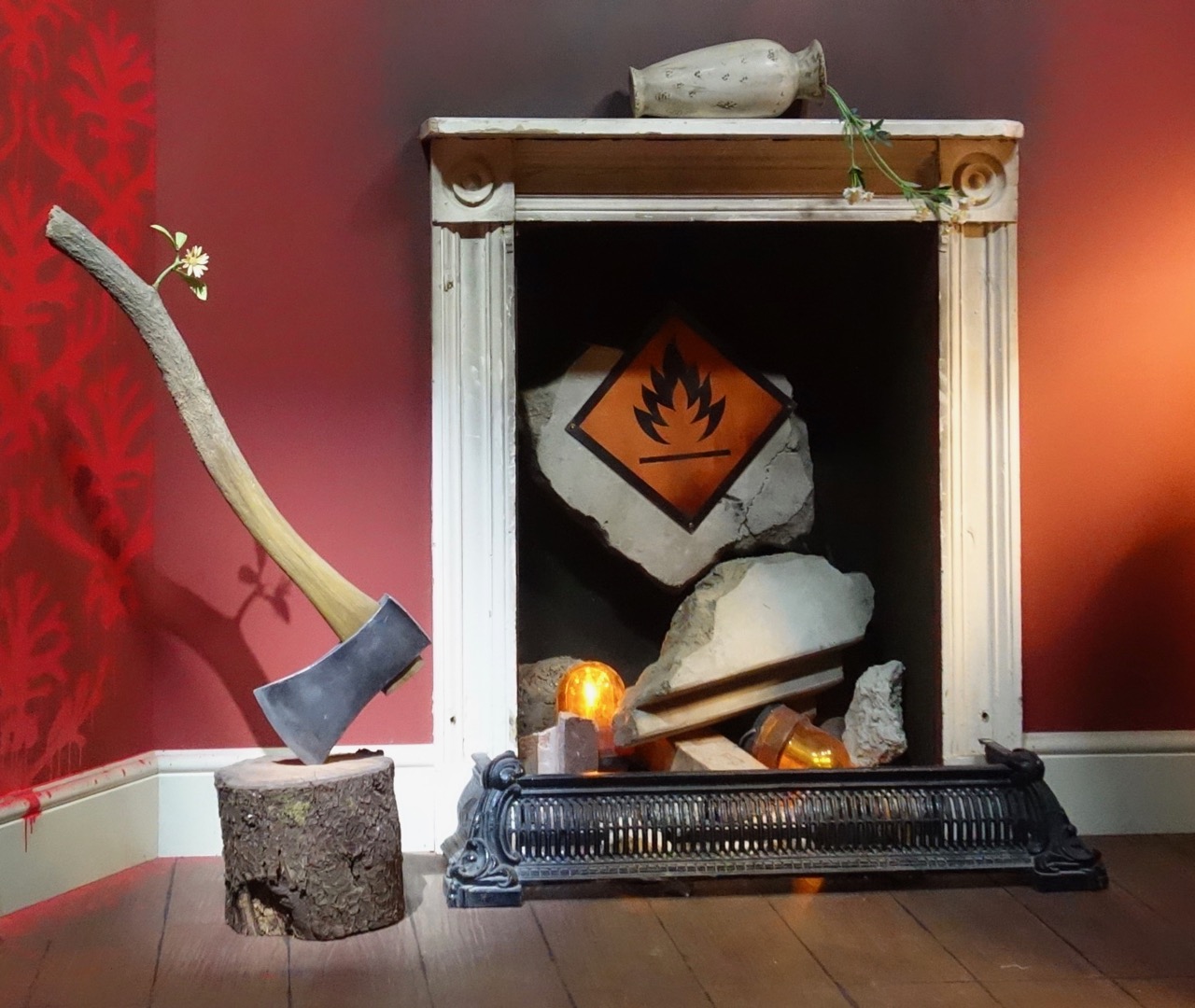 Left: "Axe — Made in collaboration with Spanish artist Escif this hand made tool with a happy ending makes a fine decorative companion to fireside or radiator. Made from polymer resin so not much good for actually chopping wood. Signed - From an edition" [Edition size not specified.][/caption]  [caption id="attachment_344601" align="aligncenter" width="1280"] 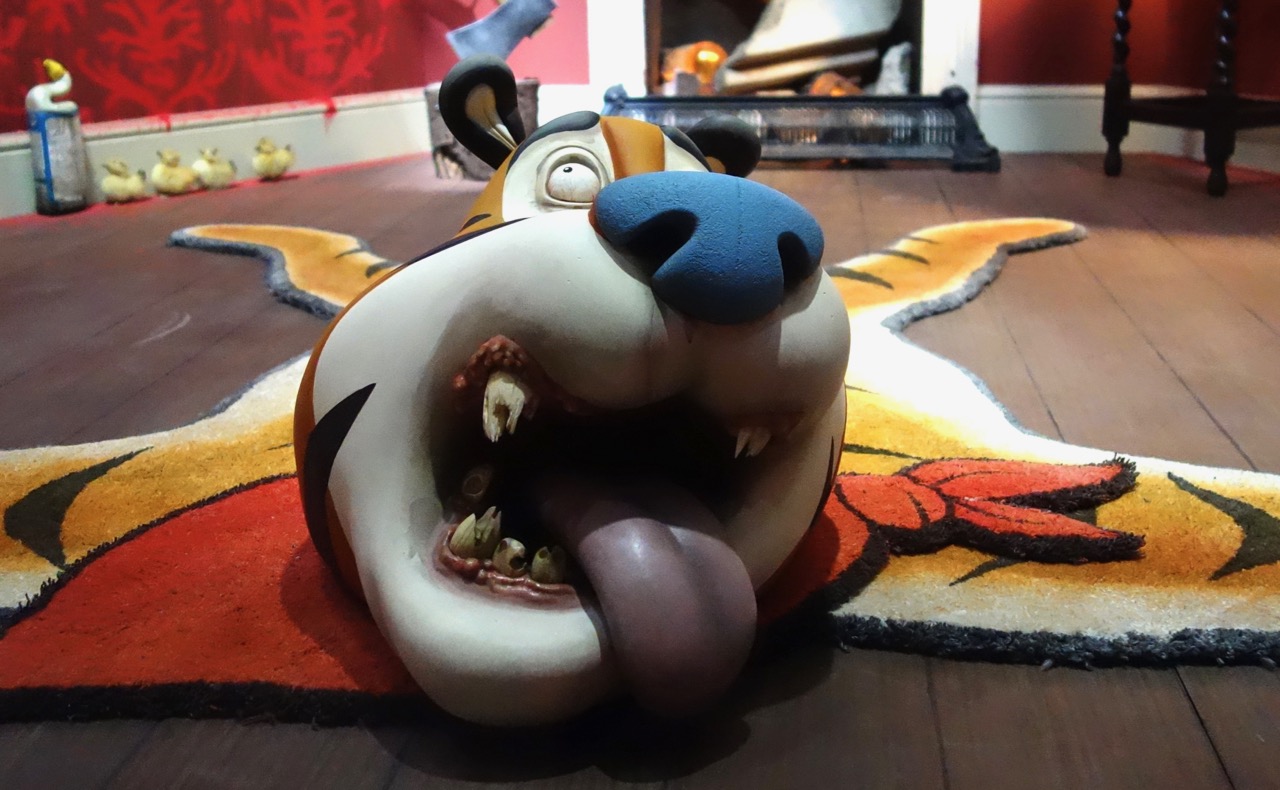 "Rug — A bit of old carpet painted to resemble the diabetes riddled corpse of Tony the tiger, this floor covering makes quite the conversation piece – especially if the conversation centres around the UK spending over £7.8million a year on tooth extractions for the under 5's. Carpet with resin head. Suitable for vegetarians. Signed. From an edition" [Edition size not specified.][/caption]  [caption id="attachment_344600" align="aligncenter" width="1280"] 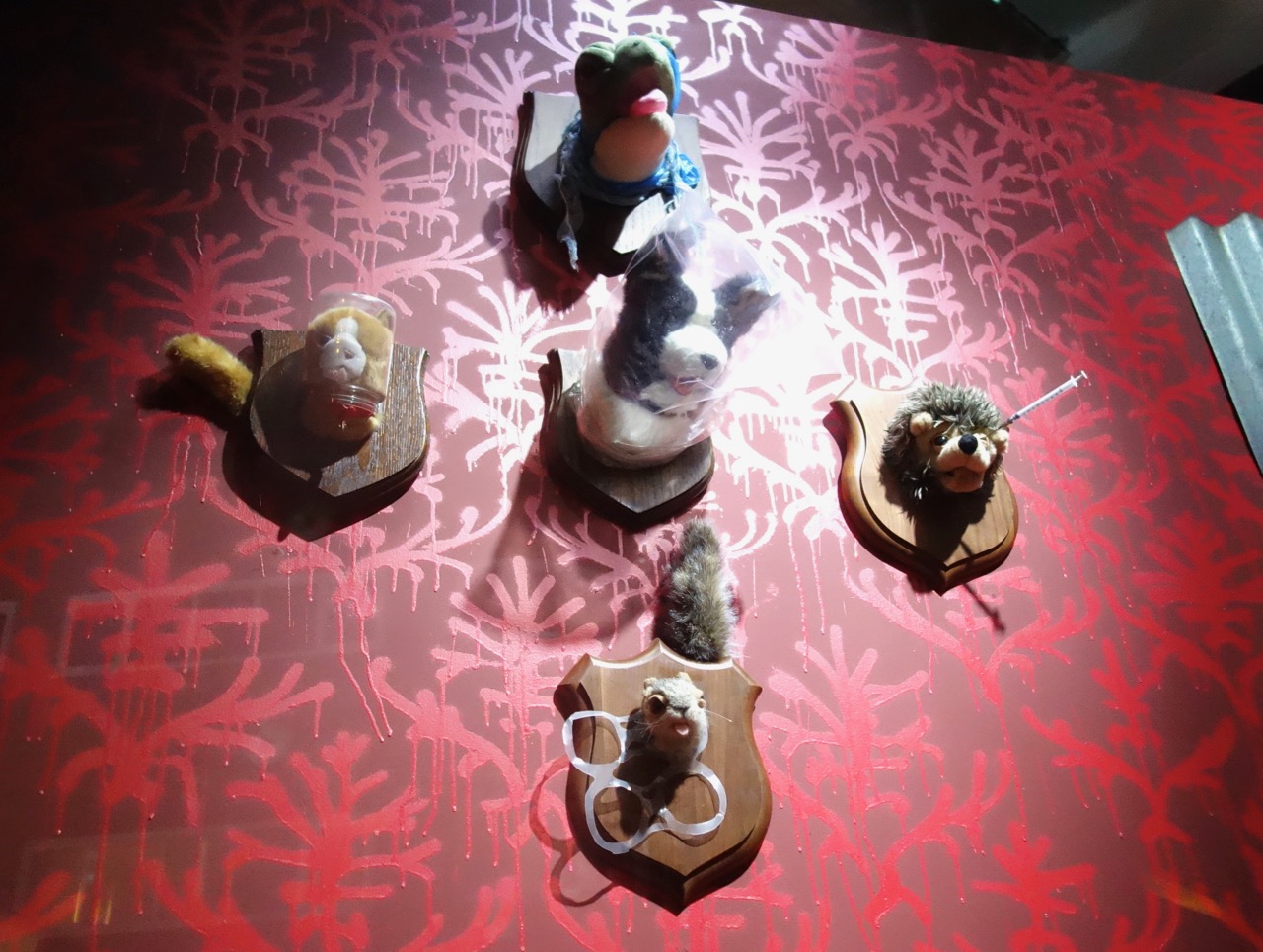 "Soft Toys — This delightful wall-mounted collection of critters is perfect for the Blue Planet generation. Made from charity shop kids toys and genuine random beach detritus, so may contain germs/infectious substances. Made as the toys become available. Sold as a set of three. Signed. Edition of 15"[/caption] 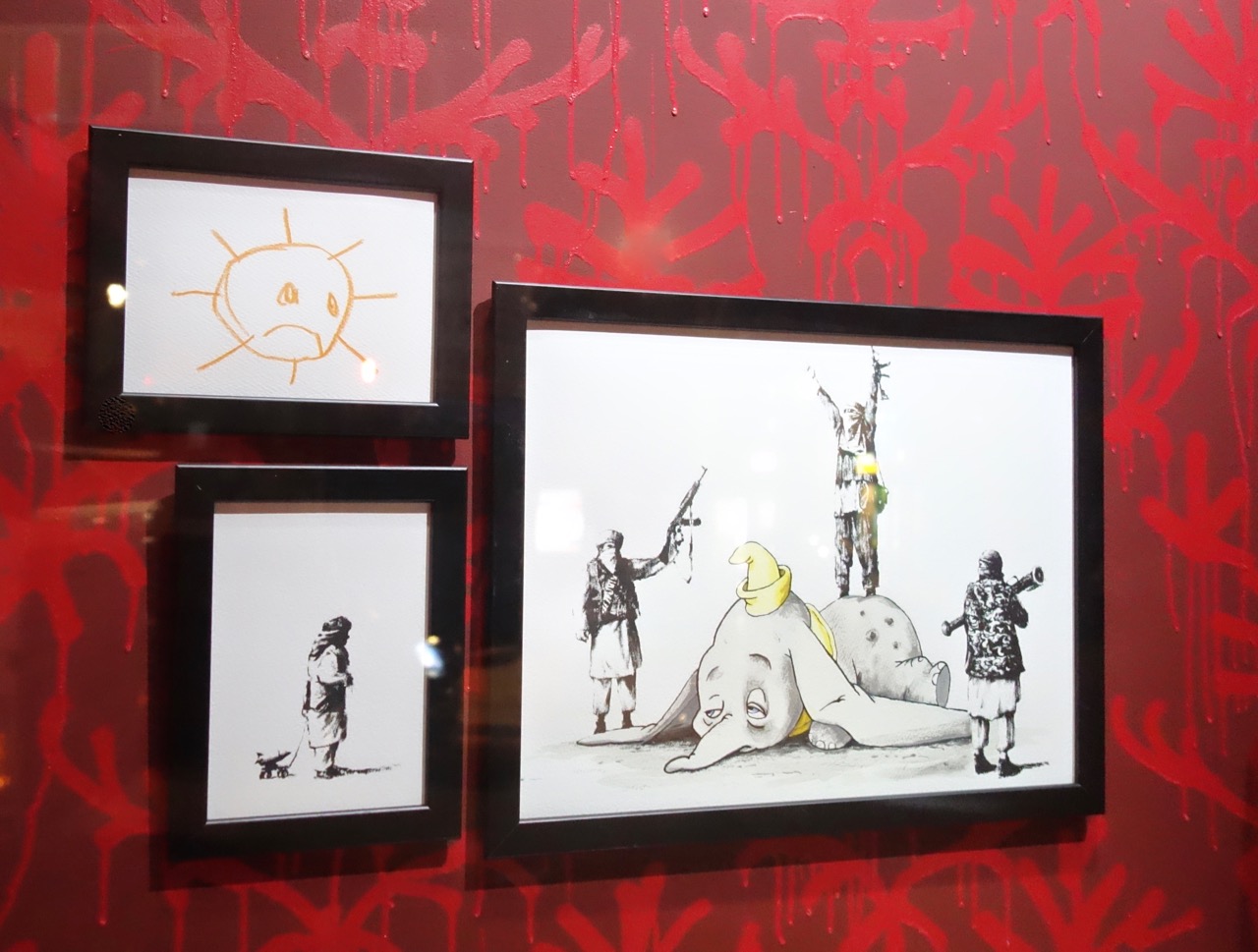 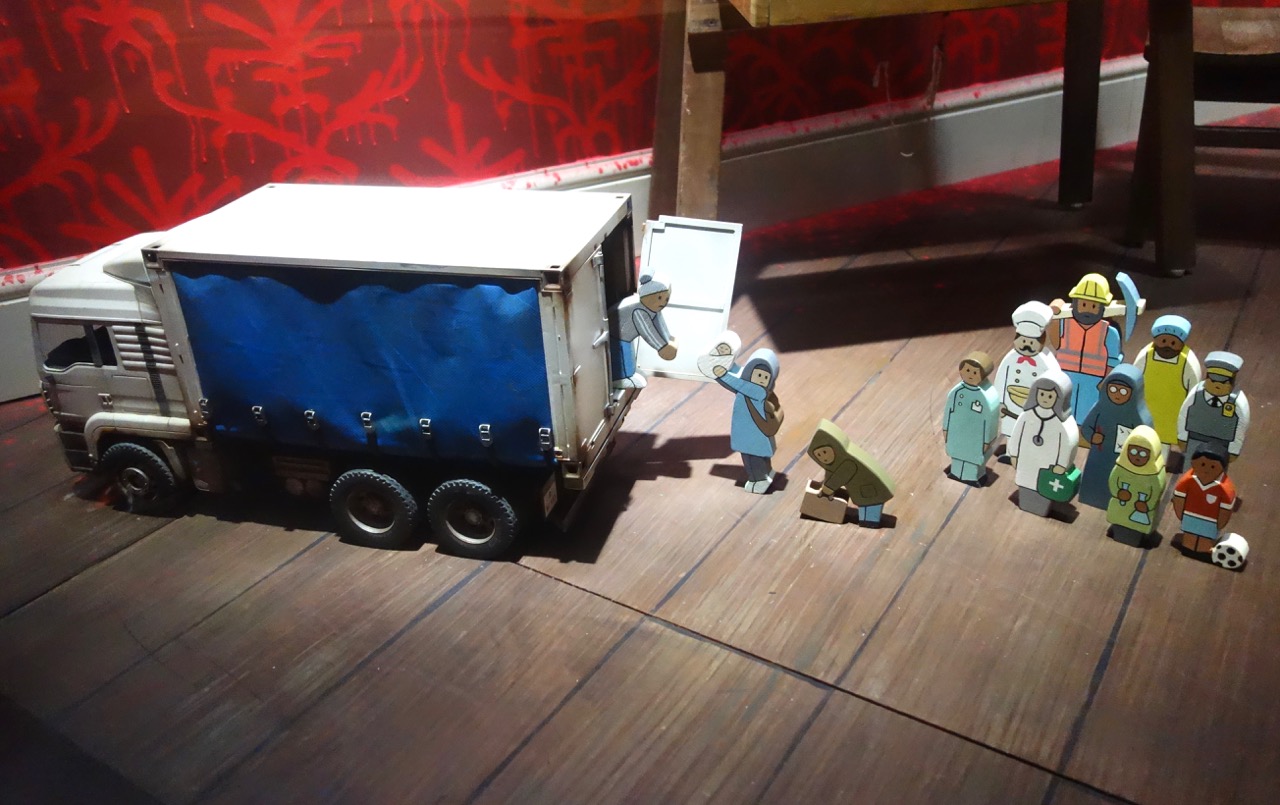 "Early Learning Counting Set — Engage all your child's learning muscles with this fun counting game. See how many figures they can fit in the truck while it makes a quick stop. Wipe clean finish, contains small parts unsuitable for under 12's. Proceeds from the sale of this item are used to support migrant rescue missions in the Mediterranean. Italian courts have ruled this illegal so customers are advised the purchase of this item could constitute a criminal offence. Signed - From an edition" [Edition size not specified.][/caption]  [caption id="attachment_344597" align="aligncenter" width="850"] 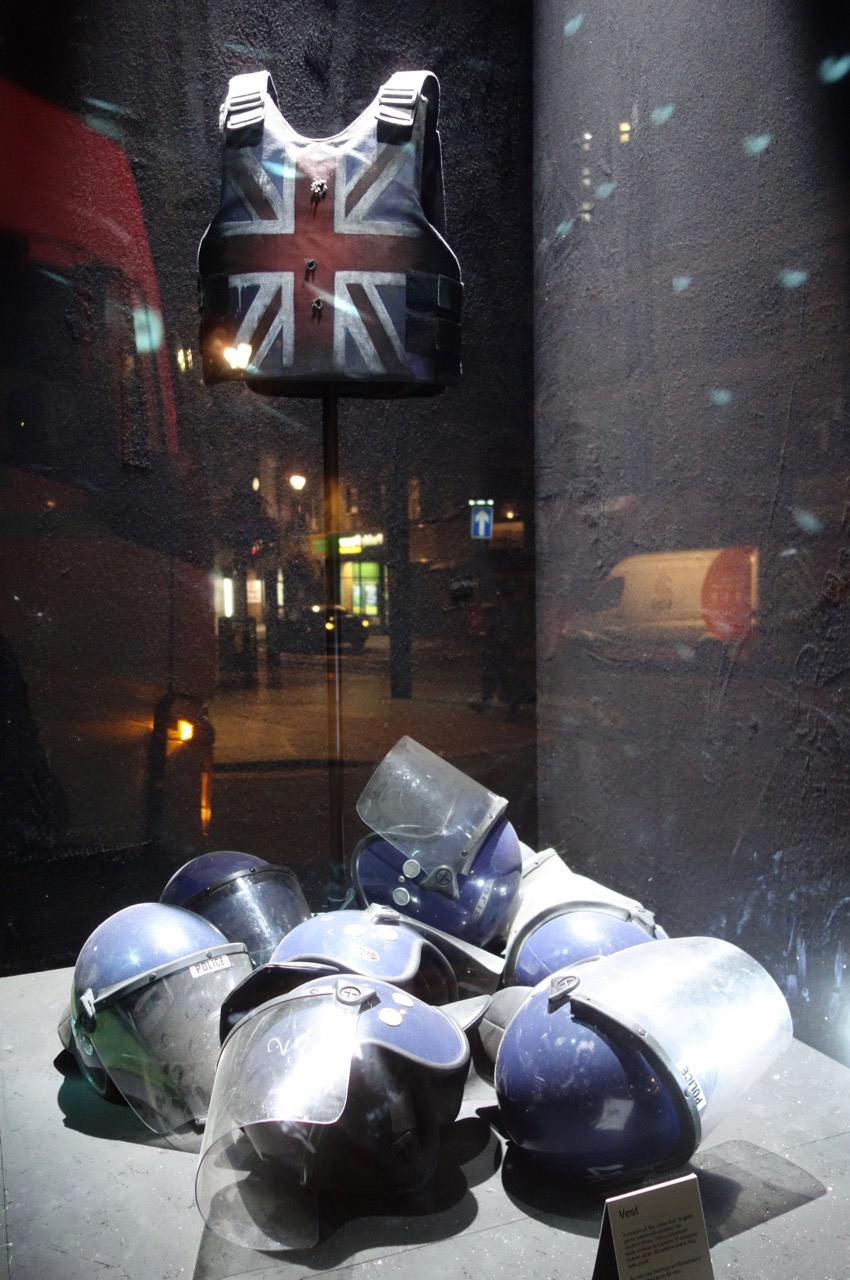 Top: "Vest — A version of the 'John Bull' English gents waistcoat updated for modern times. This customised body armour is capable of stopping bullets up to .45 calibre and is fully stab proof. As worn by Stormzy at Glastonbury festival (because its [sic] very dangerous there). Yet not machine washable. Signed. Edition of 5 plus 2 A/P"[/caption]  [caption id="attachment_344596" align="aligncenter" width="962"] 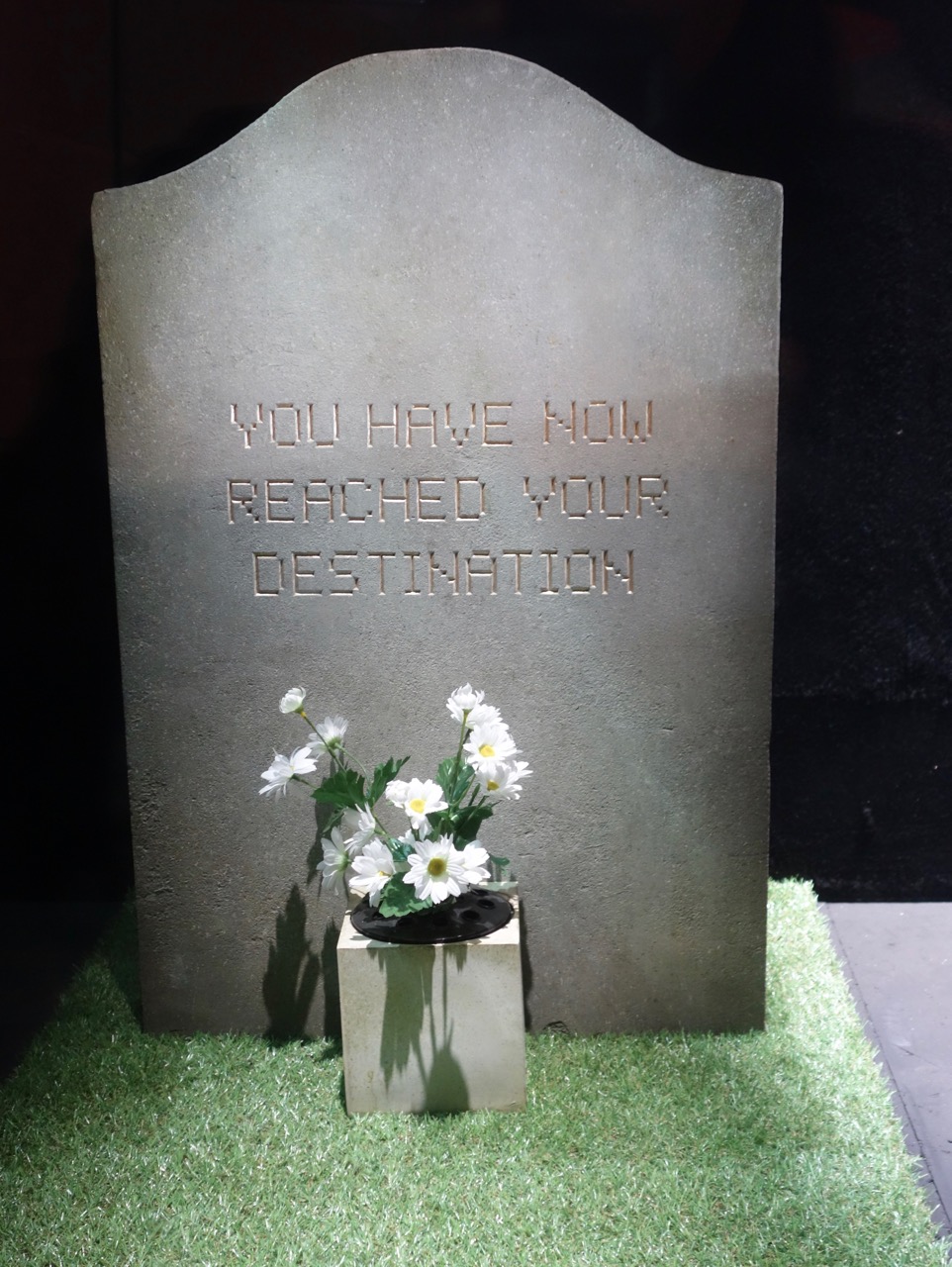 "Tombstone — What do you buy for the person who has everything? A 230kg reminder that you can't take it with you. Hand carved by Banksy in a slab of Portland stone. Collection only – from the quarry. Signed - From an edition" [Edition size not specified.][/caption]  [caption id="attachment_344595" align="aligncenter" width="1104"] 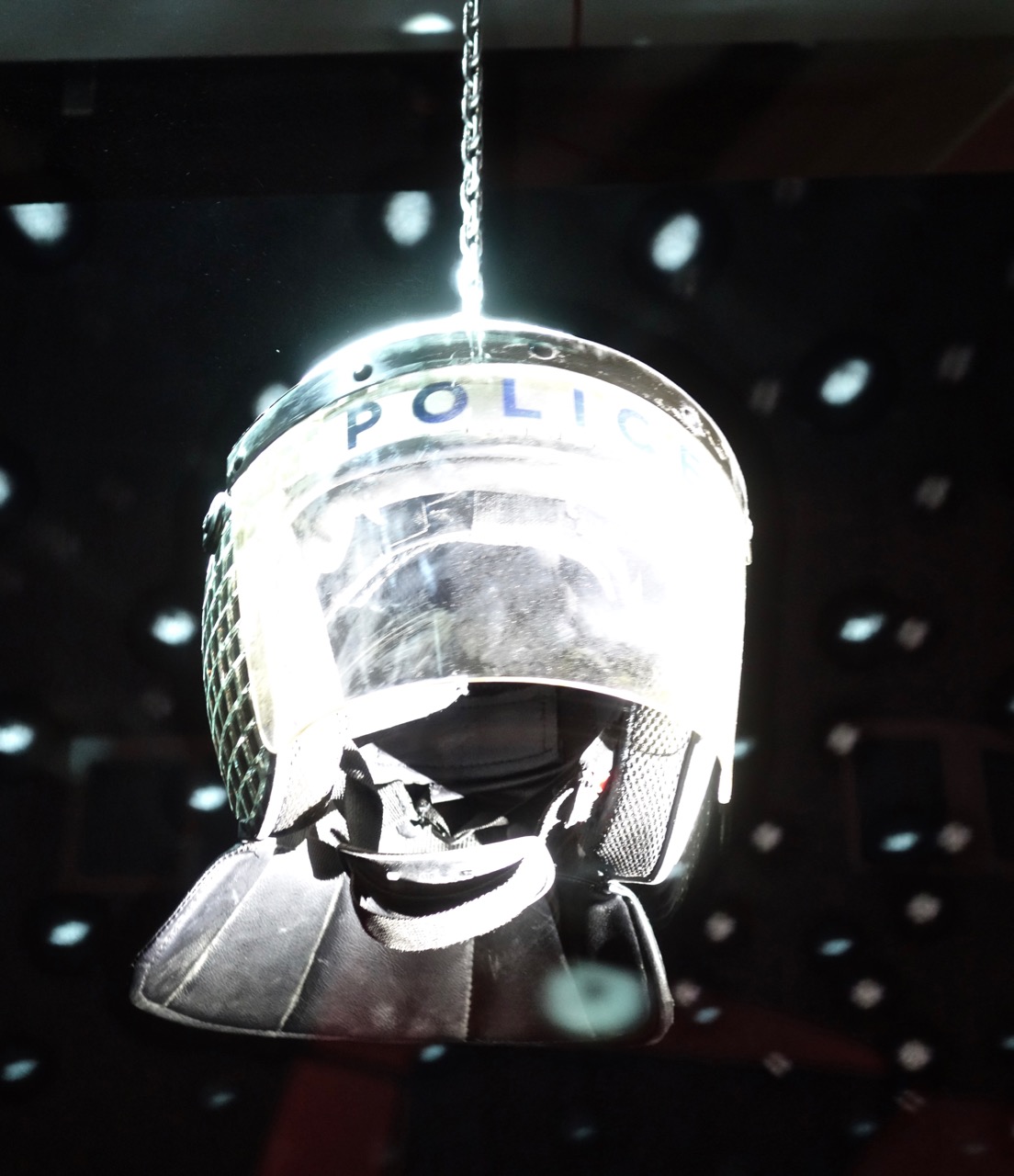 "Met Ball — The home entertainment lighting system is made from an old Police riot helmet and approximately 650 little mirrors. Comes with heavy duty chain and motor, smoke grenade not included. Signed on the inside. Edition of 50"[/caption]   [caption id="attachment_344632" align="aligncenter" width="4392"] 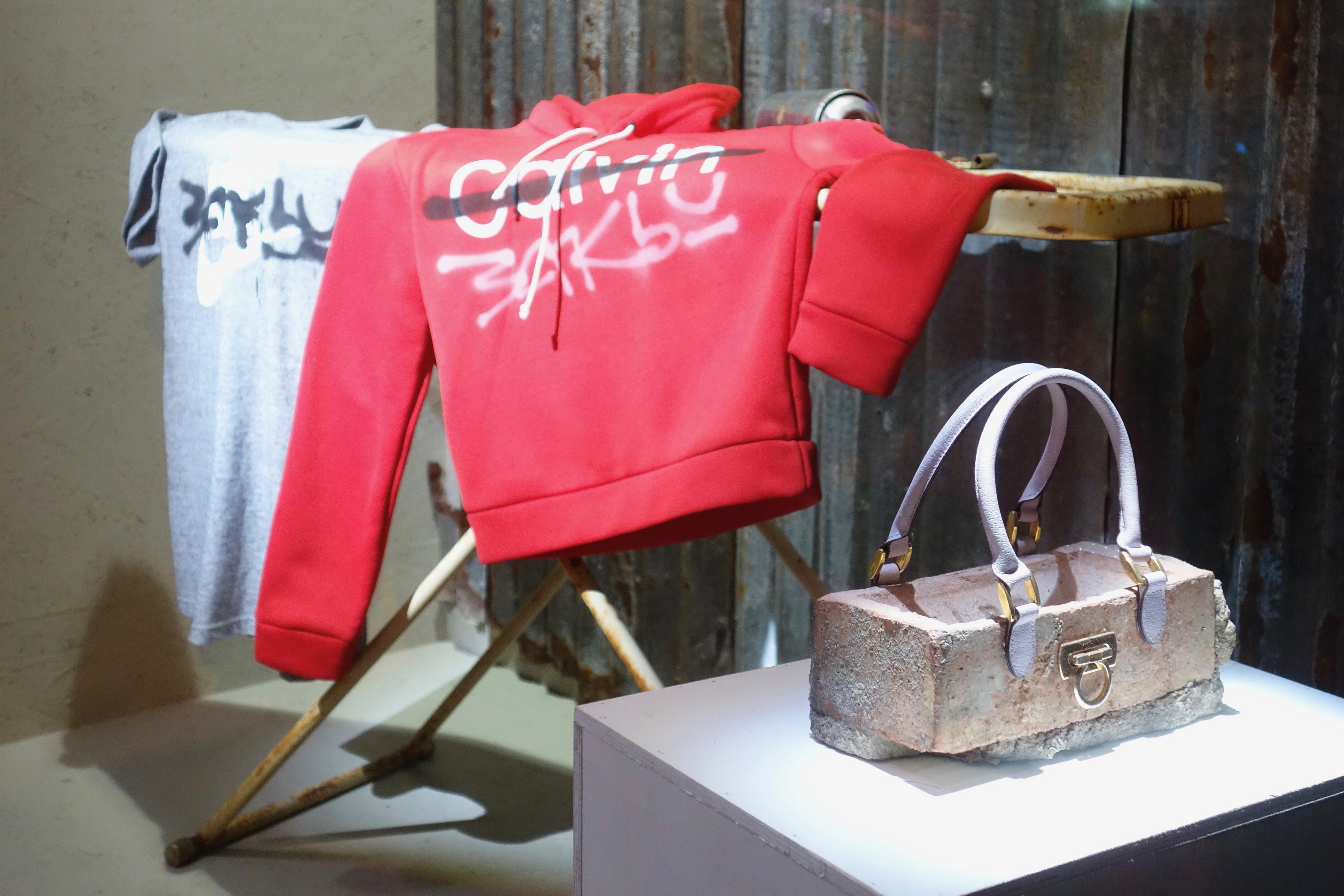 Bottom right: “Clutch Bag — This fashion-forward accessory is made from a genuine real life house brick and is perfect for the kind of person who doesn’t carry much but might need to whack someone in the face. Probably no less practical than the output of most haute couture fashion houses. Signed – Edition of 5”[/caption] 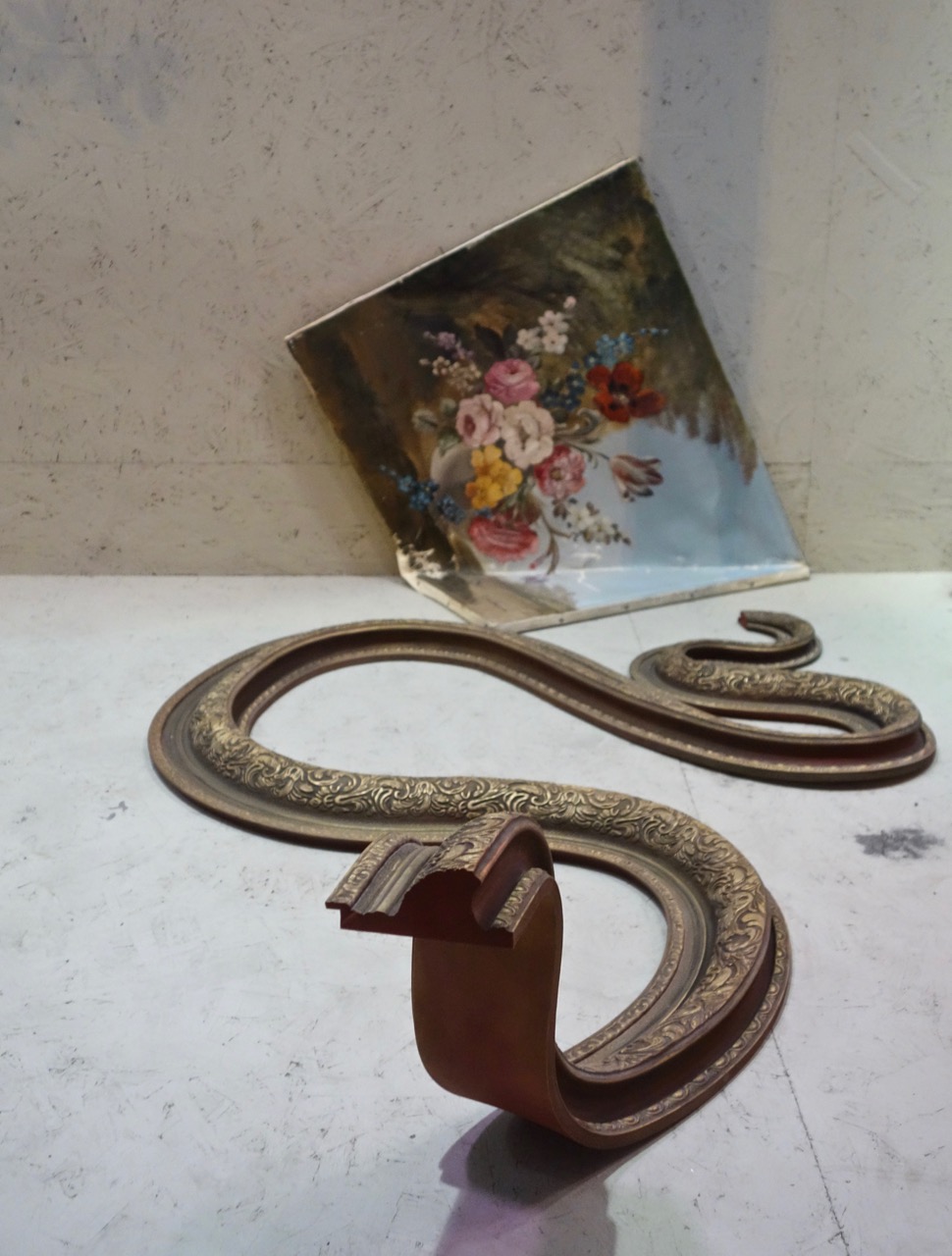 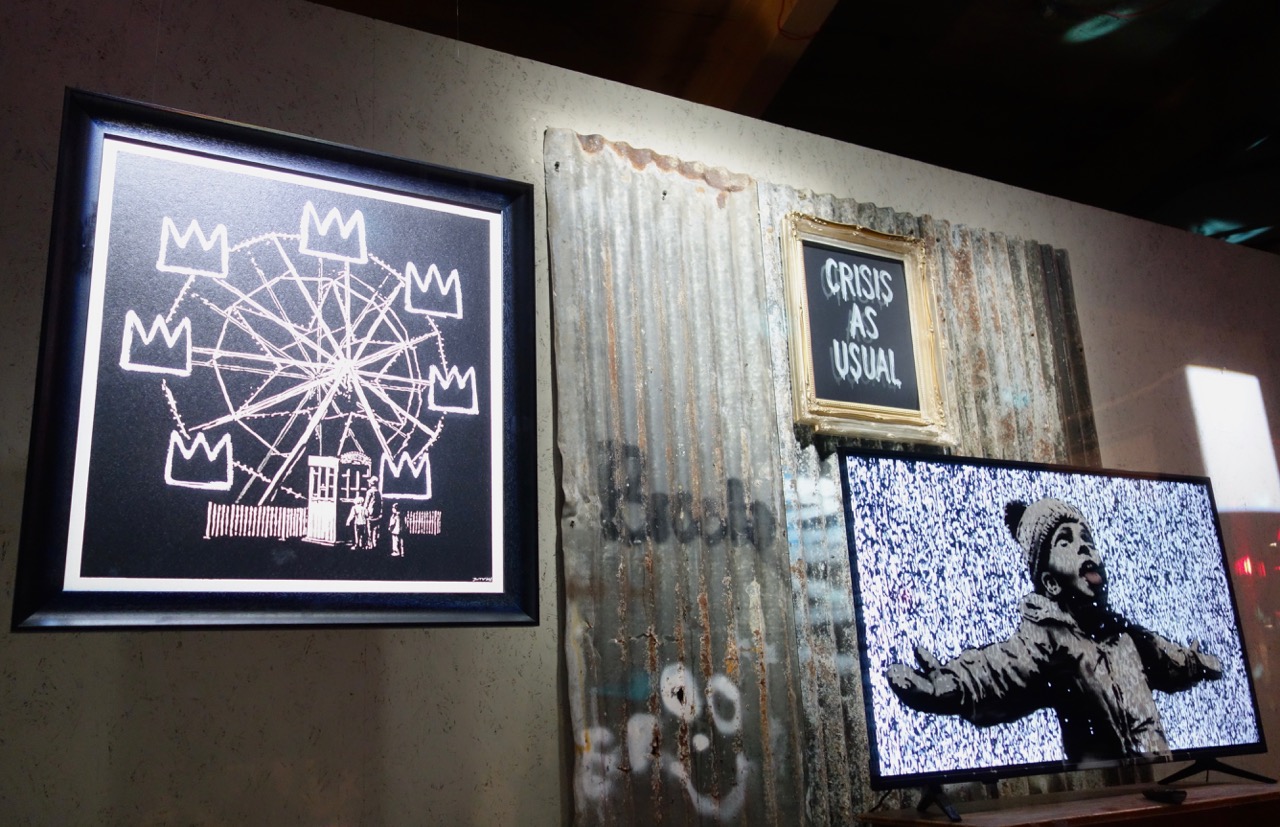 Left: "Banksquiat — A print made in homage to New York post-graffiti pioneer Jean Michel Basquiat. Banksy is apparently questioning the relentless commodification of Basquiat in recent times - by adding to the relentless commodification of Basquiat in recent times. Signed - Edition of 250 on grey board - 250 on black board"
Bottom right: "Ultra HD TV — Perfect for the snowflake generation, a 55 inch colour TV with a big Banksy painted on it. Whilst totally finefrom [sic] an art point of view, this does impare [sic] viewing quality. Made to order when the used TV's become available. Signed. Edition of 3"[/caption]  [caption id="attachment_344591" align="aligncenter" width="1280"] 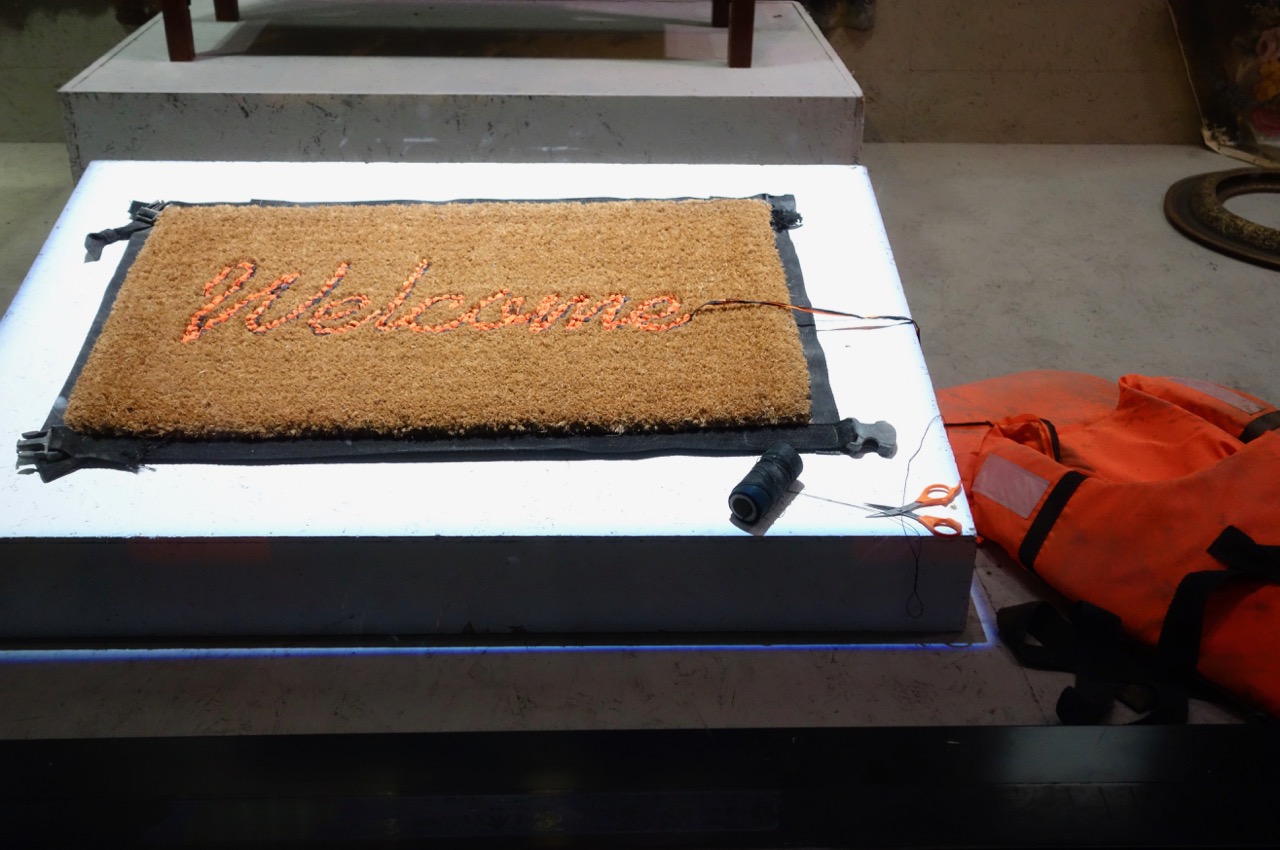 "Welcome Mat — This hard wearing floor covering is hand stitched from life vests abandoned on the beaches of Lesvos by migrants crossing the Mediterranean. Customers are advised that they no longer constitute a valid buoyancy aid - although shockingly they never did - many are cheap fakes sold by people smugglers and don't actually float. To fabricate the mats Banksy has teamed up with the organisation 'Love Welcomes' who work with women in detainment camps in Greece. All proceeds are retained locally to help refugees access key services. From an edition" [Edition size not specified.][/caption] 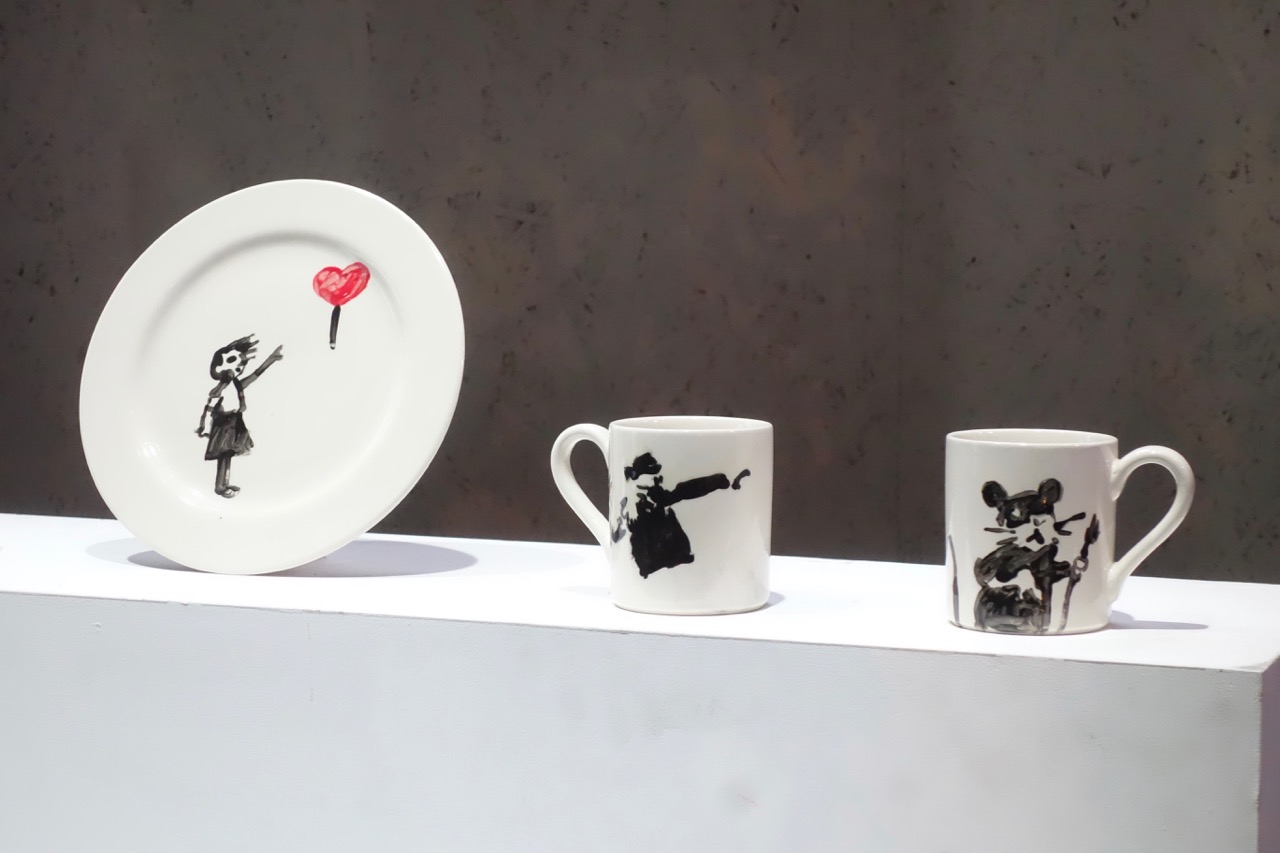 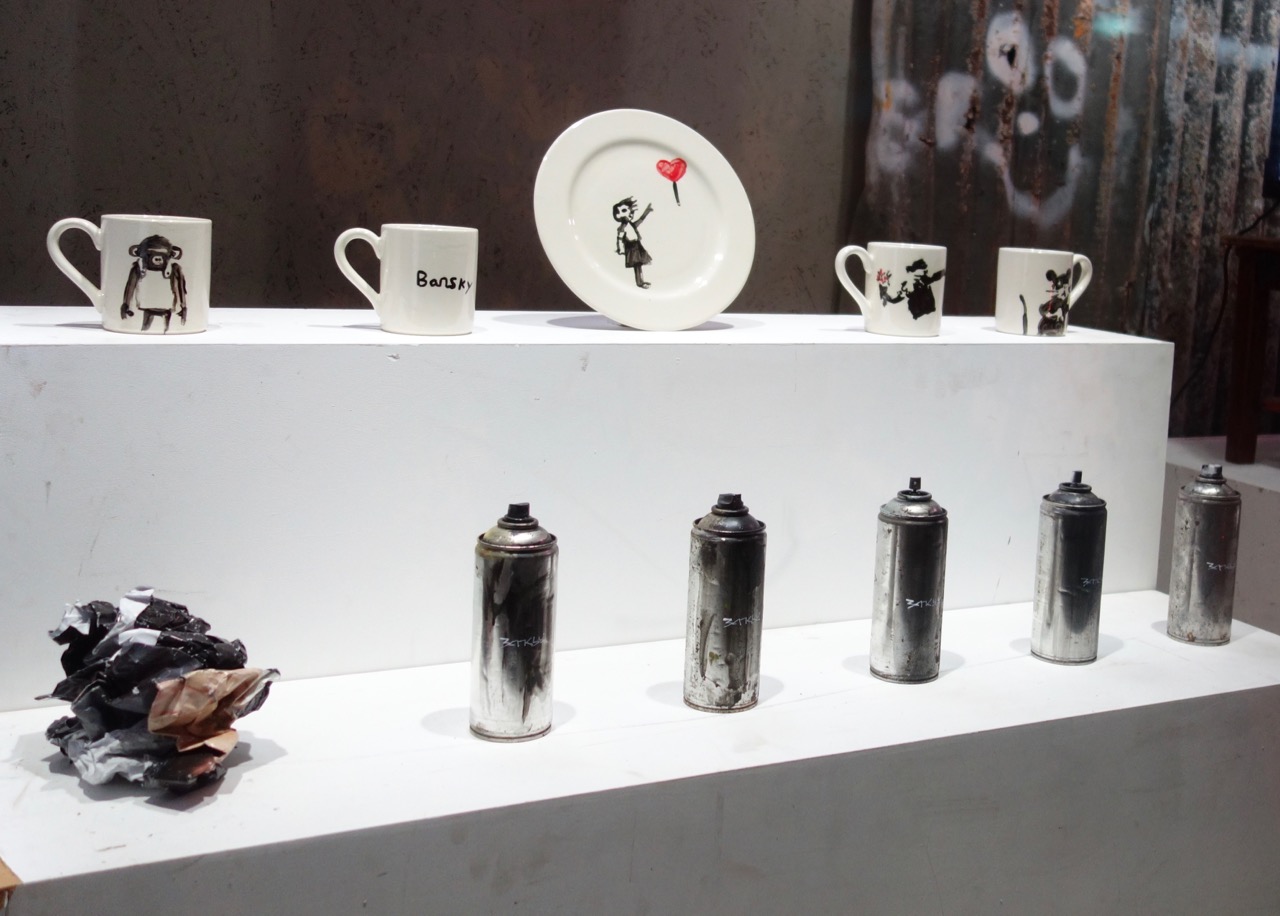 Top: "Crockery — Have you ever looked at Banksy's art and thought - my kid could do that? Well so has Banksy and now they have. Required by a court to release a range of mugs and chinaware Banksy got the kids to do it, then signed the result. The set comes fully glazed and features a charming spelling error. From an edition" [Edition size not specified.]
Bottom left: "Screwed up Morrisey [sic] poster — Celebrate the singer's drift to the far right with this special collectors item - a vintage Morrisey [sic] poster screwed up into an angry ball. Unlimited edition"
Bottom right: "'Banksy' Paint — The artist is marketing this as a brand new product. It certainly isn't an old can of paint with its label ripped off that he's written his name on. Some contents may be missing. Unlimited edition"[/caption]  [caption id="attachment_344588" align="aligncenter" width="899"] 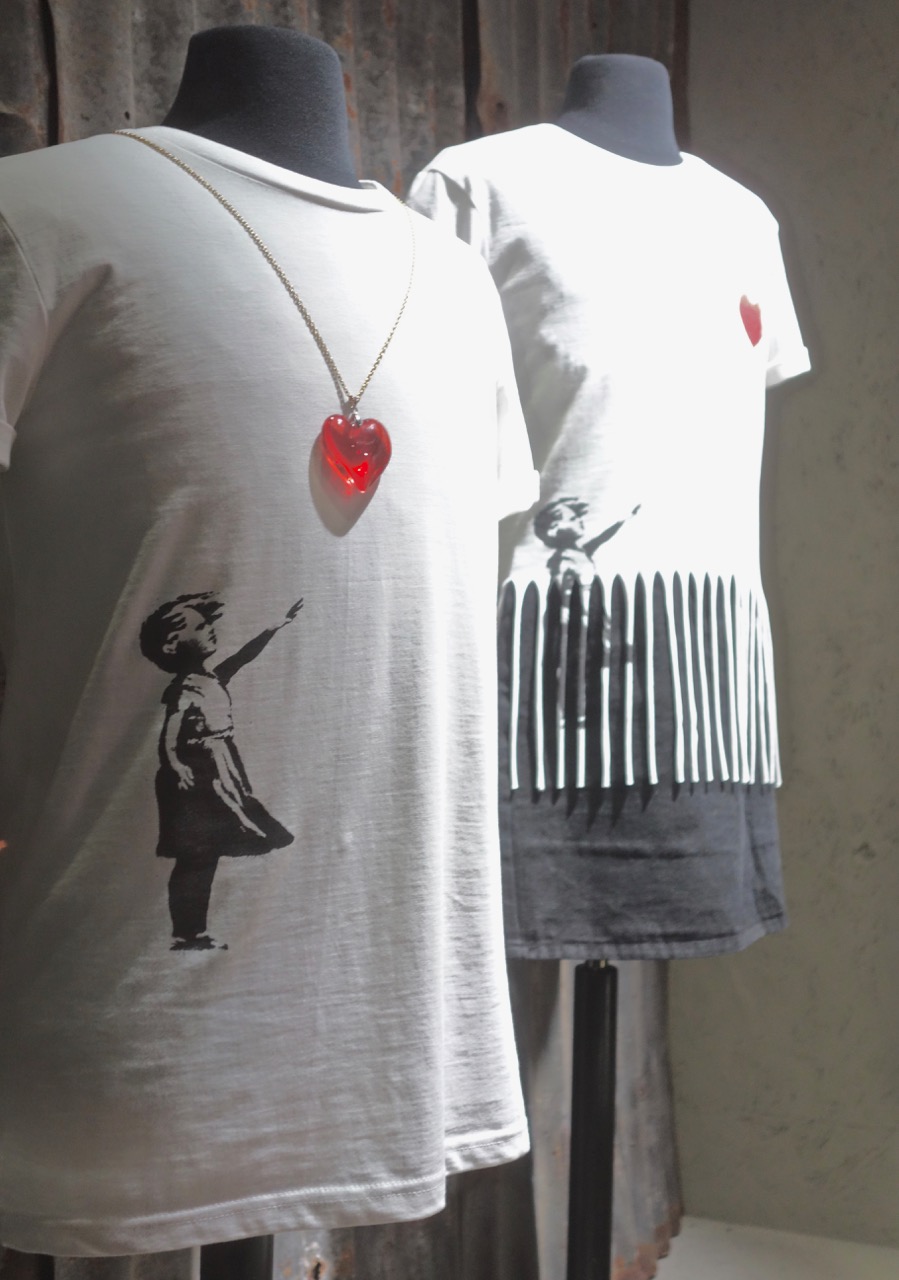 Left: "Balloon Tee — This image has been the jewel in the crown of every Banksy bootlegger for the past 15 years. Now the first official version comes with an actual jewel on it. Screenprint on guilt-free fair trade tee with pendant. Unlimited edition"
Right: "Shredded Tee — The same played-out old image, this time attacked with a knife by the artist. On-trend consumers might be aware that Vogue magazine calls 'fringing' a 'hot trend' this season. Shame we don't ship until Christmas. Screenprint on fair trade tee. Probably not really machine washable now. Unlimited edition"[/caption] 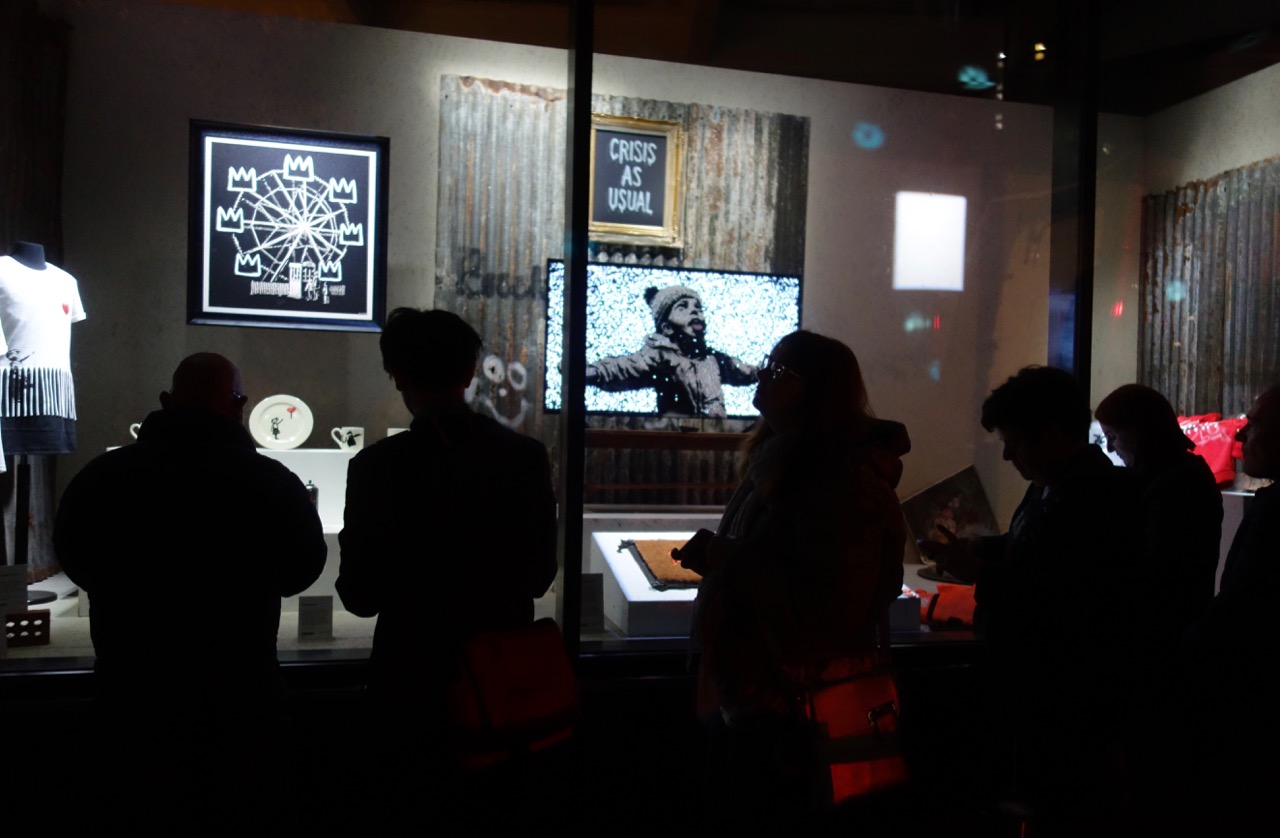