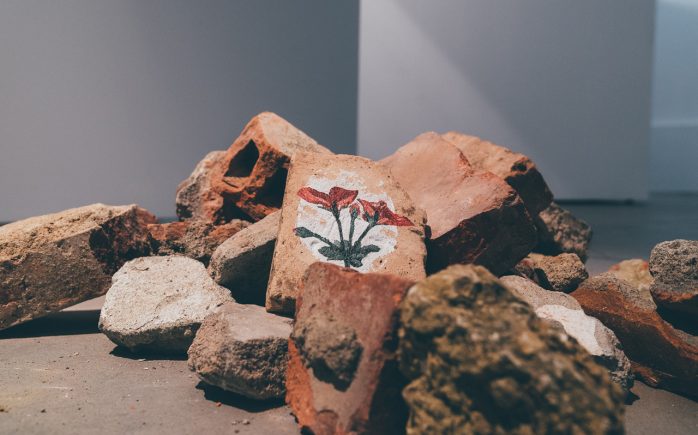 Returning after an extended absence from gallery shows, Escif is currently presenting his newest body of work entitled Está lloviendo (It's raining) at Underdogs Gallery in Lisbon.The exhibition further develops threads of his work that have predominantly been showcased in museums in recent years and draws them together into a single coherent examination of armed conflict and the environment.

The exhibition includes a collection of watercolors depicting military hardware that has all been manufactured in the artist’s native Spain. Related works in Beyond The Streets’ On Paper exhibition last year were accompanied by the scribbles of the enigmatic, and presumably familial, Otto 183; here though the markings, which seek to copy Escif’s original paintings, are more legible. But the weapons of war have been copied by young children so, as would be expected from such young hands, the reproductions vary significantly from the originals. This process is simultaneously both creative and a destructive and suggests that fresh minds can rebuild the world differently.

Varieties of wild flowers, such as irises, geraniums and wall-rocket, have been painted on fragments of stone and placed on the gallery’s floor as if they are growing out of the ruins of modern life. These works pick up on themes explored in his 2020 show at CCC Centre del Carme in his native València. This explosion of life out of barren rock serves as a portent for the unstoppable forces of nature to regenerate. But these flowers are also adept at hybridization - the process of dissimilar plants crossbreeding to create something new - and Escif’s delicate paintings suggest that the next generation doesn’t just have the potential to change the personnel in charge but instead to change the fundamental systems that govern our world.

However, the exhibition doesn’t blithely off-load solving the systemic problems we face to the next generation. A series of minimalist cloud paintings are notably ambiguous; while they could be viewed as natural masses of water droplets floating in the sky, the works’ titles explicitly reference the run up to the Israeli army’s 2004 offensive in the Gaza Strip, where 50% of the population are under the age of 15. This suggests the natural clouds have been obscured by clouds of smoke rising from the site of a missile strike or perhaps by the air pollution created by the slash and burn practices highlighted in his Rewind film. If children can’t see the clouds then how can they play pareidolic games finding shapes in those clouds? And if they can’t imagine a cloud is a rabbit, elephant or dragon then how can they imagine another world where things can be done differently?

With its solidly utilitarian form and delicate choice of materials, an editioned ceramic fire extinguisher reflects the simultaneous durability and fragility of nature. The sculpture is based on a mural created in Atlanta back in 2011 (covered) but it’s also thematically in keeping with a wall he painted more recently at the Power Station in Shanghai which repurposed imagery from the fire posters that appeared ubiquitously around the museum. This prosaic choice of source material underlines Escif’s tendency to shy away from the bombastic and spectacular. Instead, he has pulled together each of these ideas into a single coherent show to quietly whisper that the future is unwritten and another world is possible.