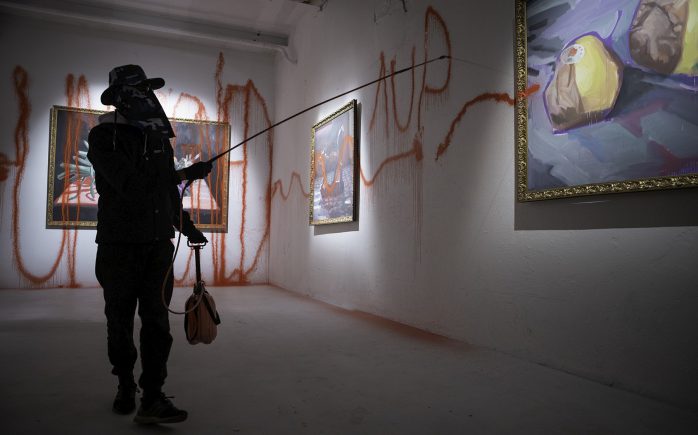 Last Saturday marked the official opening of the 19th edition of Nuart Festival and we were happy to once again attend the festivities which this year lined up with the local Pride celebrations. Backed up by the great weather, the good vibes from the outdoors were successfully moved into the former brewery tunnels of Tao Scene where Nuart's indoor exhibition took place. Working around this year's theme of the festival, Brand new, you're retro, the works presented here successfully utilized the unique opportunity for the artists to create indoor works while keeping the spirit and freedom of their usual outdoor practice. This was probably most noticeable in immersive installations constructed by the members of the notorious international graffiti crew, 1UP CREW. Known for their extreme actions around Berlin, but also internationally (a sunken boat in Greece, or Athen's graffiti Olympics), they transformed their space into a graffiti-covered subway tunnel, where a video showing their "typical night out" was presented. Also paying tribute to one of the most widespread art movements, Portuguese artist Nuno Viegas realistically rendered a crowbar and a plastic bag, often basic equipment for graffiti writers worldwide. In a similar manner, Dotmasters painted a couple of realistic stencil pieces, creating an illusion of different tools being duck-taped on the walls of the venue, while Spanish painter Julio Anaya Cabanding created a quiet space by turning his entire showplace black and virtually hanging one single classic work by one of the most famous Norwegian artists, Lars Hertervig. By painting the image, the frame, and the light and shadow effects on the walls of the tunnel, the Malga-based artist made probably the most direct connection between the old and new ways of both creating and experiencing. This clash of cultures was most obvious in the installation and performance piece created by Spanish artist Jofre Oliveras, who painted a series of canvases mirroring a classic white cube gallery setting. The moment the exhibition was opened for the public, one of the members of 1UP CREW crossed the entire exhibition with red paint writing "unsigned" and "1up" over it. This performance was arranged with Oliveras as a statement against the speculations of galleries and art world on the value works in regards to the author's name or signature. Transforming his usual outdoor practice that repurposes the billboard format and advertising infrastructure for the creation of new work, XO composed an abstract vision of the urban landscape infested with ads, while a number of artists used the opportunity to express their critical thinking and expose important issues. Beirut's Jad El Khoury presented work he's been creating in his hometown, painting street pieces around existing bullet holes on buildings as a reminder of the long term military conflict in Lebanon. Paul Harfleet painted a single pansy flower presenting his impactful international project that consists of planting one unmarked pansy on the site of homophobic abuse, next to Argentinian-born Hyuro who painted a sequence depicting a female figure undressing and urinating while standing up. As a symbol of breaking standard social structures, the work is a continuation of her ongoing series that questions and criticizes the patriarchal and capitalistic systems of power. Cleverly transforming their signature outdoor activity for the creation of indoor work, Dr D and Edwin teamed up for a poignant installation that served as a harsh critique of Norway's oil industry, while warning visitors about the issue of global warming. Through sculptures, murals, and countless posters and wall writings, the two created arguably the most impactful presentation at this year's show. Photo credit by Ian Cox (@wallkandy).