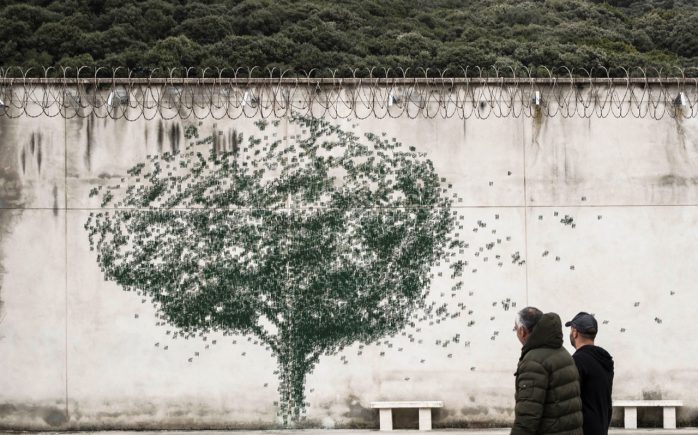 Continuing his penchant of working on unconventional creative projects, Pejac recently completed a few interventions at the Penitentiary Center of El Dueso in Spain. Situated at the entrance of artist's hometown of Santander, it was built at the beginning of the 20th century on the remains of one of Napoleon's old forts and is considered the oldest prison in the country. Over the course of 11 days, the Spanish artist completed two murals and modified the backboard of a basketball hoop with a trompe l'oeil element. Considering where these are painted, the imagery that was chosen sent a powerful message to the inmates and frankly anyone who sees it. The first mural, entitled The Shape of Days, features a massive tree created out of thousands of hash marks, denoting the passage of time and hope that each day brings one closer to the freedom and the holm oak forest behind the walls of the prison. The second piece, entitled Hollow Walls, was created in a corridor between stark walls and barbed wire and adds a poetic and surreal element to the surroundings. The last intervention was left on the basketball court and utilized real 22-carat gold leaf to change an everyday object into a luxury item. He further explains his Gold Mine project - "A prison itself is a place wrapped in harsh reality and at the same time, I feel that it has a great surrealist charge. It is as if you only need to scratch a little on its walls to discover the poetry hidden inside." Discuss Pejac here. https://www.youtube.com/watch?v=1dUSONb3nZk