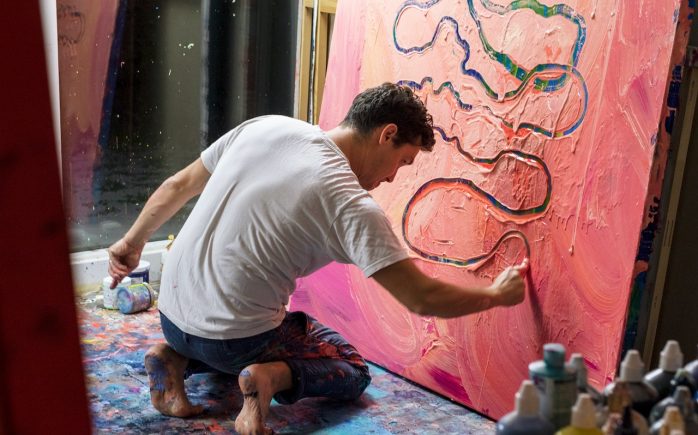 Today in Copenhagen, a new exhibition from Carl Krull (featured) will mark the grand opening of Formation Gallery, a new space in the heart of Vesterbro. Known for his Seismic series of black & white works, the Danish artist is venturing into new territory with color and a more sculptural aesthetic.

“There was a time when my studio consisted of a pair of virtual reality glasses. VR showed me that my drawn line was thriving detached from the surface of the paper and was sculptural by nature. My drawings became three-dimensional, like celestial bodies, and the boundaries between sculpture and drawing disappeared. If I had ever had an insecure feeling about making sculpture that was restraining me, it was now gone. And in recent years I have made three very different sculpture projects in the public space. My work with VR and sculpture had propelled a new artistic liftoff and unlocked the third dimension, it was my second artistic breakthrough. My first breakthrough had been my seismic work that depicted figures inhabiting topographical territories, in a manner that resemble phenomena found in nature like the formations in stalactite caves or the growth rings found in trees. I now work much more unrestrained, less dogmatically, and after a 10-year break from painting, I have spent the last three years working exclusively with painting. My upcoming exhibition Protagonist at Formation Gallery is the first time I show this body of work.”

Take a look at some shots from the studio courtesy of Henrik Haven.