We’ve all faced this dilemma. The man in your life is old enough to pay a mortgage, hold down a job and yet still lives in what appears to be, a dorm room/frat house. The thought of spending time at, never the less inviting people over to, his place makes you cringe. Getting a man to redecorate is a massive challenge usually, and I have a few tips and product picks for helping the process go smoothly so that he feels comfortable in his place and you don’t run screaming from it every time you cross the threshold.

First off, face it, he is not going to want floral pillows, a shabby chic couch or anything of the sort. He’s a guy and his place needs to look like a guy’s (once married and cohabitating, well, that is another discussion). Approach the process one thing at a time, if you suggest he redo everything all at once he’ll probably feel overwhelmed and shut you down.

So why don’t you start with suggesting something that ALL men want to be the focus of their room? The television. There are some great looking media consoles out there that can contain clutter (and his XBox 360, Wii, Playstation) and look grown up. A $2,000 tv sitting atop plastic milkcrates? I don’t think so. This first one is from Pottery Barn and the glass cabinets have adjustable shelves to hold those game systems/DVD players and the like. The second one is from JCPenney and is very affordable and creates a whole wall system for pictures, signed footballs, whatever! 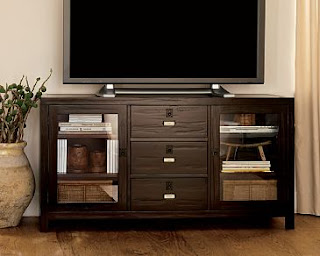 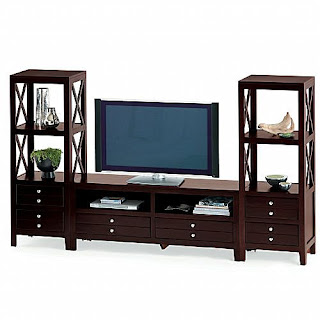 The living room is the room you’ll probably spend the most time in so while you’ve got him pleased with his new media console and on a roll, go for a new carpet! FLOR rug tiles are perfect, and this pattern reminds me of a men’s dress shirt or tie with it’s grey and blue stripes. Plus, if beer gets spilled on one, you just replace that one tile! Genius! 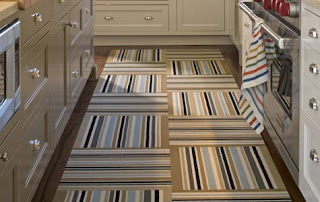 If he really needs a new couch, approach him with one that has straight lines, a subtle fabric and is on the heavier looking side, like this West Elm sofa. Throw pillows could present a challenge, so if you have selected a patterned rug like the one above, just throw some solid color covers on there. If the rug is solid, like a sisal (also great and man-friendly) then go with a blue or grey based stripe, like these from West Elm (which I absolutely LOVE). Another thing that seems to be on every man’s wish list is a leather chair. Very testosterone-chic, I suppose. This one from Boston Interiors is even a RECLINER! I bet you could get him to throw out his framed Scarface poster in trade for this baby! The clean lines make it look quite attractive and he can kick back and watch the game with a beer in style. 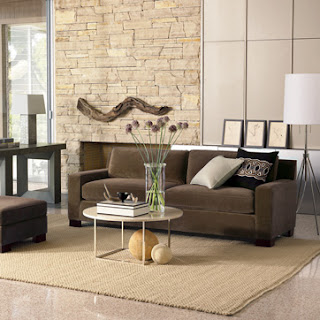 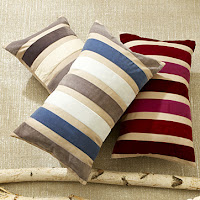 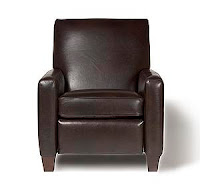 The next most important room is probably the bedroom and here you want to focus on getting new bedding first. Solid colored duvet covers will always go down easy, but you could try for something a little more decorative, but still manly, with this pick from Pillows and Throws. If
he is open to getting a new bed, a dark wood sleigh bed or the like would be pleasing to both of you. 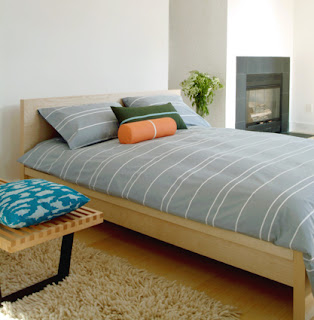 A dining area is probably not on the top of his priority list. Perhaps suggesting that it can serve as a poker table will help? Who knows. A simple table and chairs is all you need, so pick something clean and classic. If he has a decent table already, but the chairs have seen better days, some simple chairs like these from West Elm would do just fine and look especially great with a more traditional table! 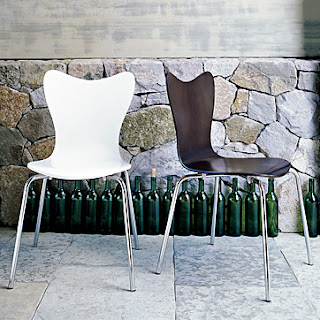 And last, but certainly not least, let’s address his memorabilia. Many guys have sports memorabilia and hiding his prized signed jersey may not be something he’s ready to do yet (again, marriage can change that!). If it’s gotta be on the wall, make it looks good. So try to make his collection of photos and knick knacks look attractive by putting up some black photo shelving (these below are from Pottery Barn) and frame everything in matching black frames with white matting. Set baseballs/trophies/whatever on there too to mix up the texture of it. I even found a nice jersey frame that would match as well (and a Brady jersey in it to boot! Go Tommy!) Suggest that you put this up in the living room where he’ll have friends over to see it all, and not in the bedroom where you can stare at it at night while plotting light the stuff on fire. 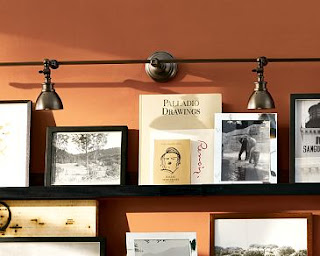 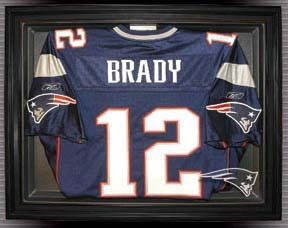