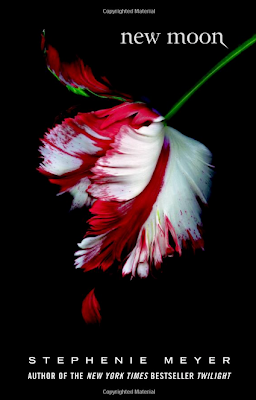 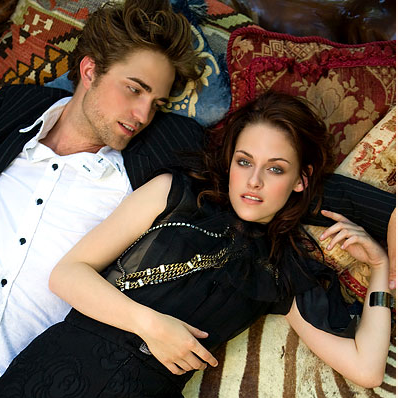 I love the cover design of this series, but K.Stewart needs to get her grubby paws off my boyfriend.
Warning: This lowbrow post may horrify some of you.

After making yet another Twilight reference in my Facebook status update yesterday (yep, I’m turning 30, not 13, this summer) one of my brothers wrote me and said “Can you please explain to me what everyone’s fascination is with Twilight, and more specifically this Edward guy?” I thought for a minute about all the Twilight commentary I’ve heard simply in passing this week alone: the woman in Border’s telling her friend that she took the series on her honeymoon and got legitimately pissed off that her new hubby was not Edward (followed by strangers telling her they “totally understood”). Or the fact that one of my fave design bloggers showed off her “Twilight” section of her bookshelf. Or the Facebook updates I see about skipping dates, work and the gym to stay in and read these books. So what is it about Twilight that drives us women to such craziness? 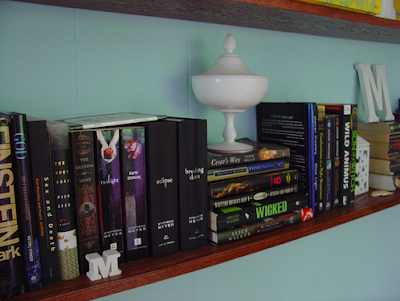 Let me start off by sharing that I was a total doubter when Twilight first came out. My friend Zoe told me about it a long time ago and I said “Wait, it’s about vampires? I don’t read vampire books. Eww”. “Trust me”, she said, “you’ll thank me later”. Time passed and one day I saw a copy on sale at the checkout counter at TJ Maxx for $5-so I picked it up. The 50-something year old checkout lady looked at me with longing eyes and sighed “Oh my God, have you not read this yet??” Seriously, even the mature checkout lady was hip to Twilight??? 48 hours later, cut to me driving frantically to Borders at 9 a.m. to buy the rest of the series and then rush back home. I read them in a month and I couldn’t tell you anything I did or said in that time, I’m not sure I even took a break to shower. What had become of me? It’s not like the writing is even good, but there is something about this story that just renders even the most mature woman a thumping-hearted, lovesick tween. And his name is Edward Cullen. 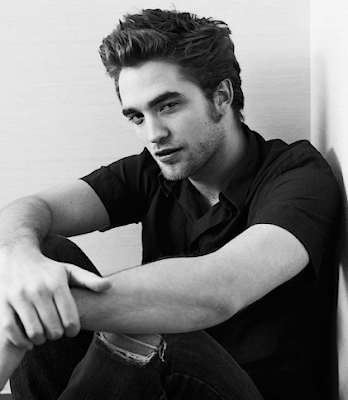 So here’s the deal with Edward, for those not in the know like my brother. He causes such a stir because his character is the perfect man. He’s handsome, wealthy, romantic and devoted. The mysterious, brooding bad boy who writes lullabies on the piano for his girlfriend and then rips out the throats of bad guys in defense of her honor. He says things like “Your my own personal brand of heroin” and “I don’t think I have the strength to stay away from you any longer” (cue knee buckling). He is the perfectly impossible combination of poet, athlete, intellectual and bad ass- the human(ish) equivalent of a unicorn. And having Rob Pattinson to use as an image of Edward, well, that’s just icing on the cake according to yours truly. Now to give my brother credit, he made a good point of saying that if a normal guy ever said such lines to a girl, they’d be laughed at and/or slapped with a restraining order. Good point, and probably true. But this is make believe, so I’m gonna stick to my guns and swoon anyways. Every woman wants to feel coveted, craved, defended and protected and well, that’s just what we get from reading about this fictitious character who was crafted specifically to feed that desire (because let’s face it, we don’t always get that from our real life men.) So thank you, Stephanie Meyer. Thank you so very much.

Frankly, to women over the age of 18, these books are a bit like what internet porn is to guys (you all look at it. We know.) It’s an escapist fantasy that allows you forget all the bullshit going on in your life and just enjoy the pleasure of a hot, undead teenager who would kill people for you and then buy you a brand new Audi for your birthday. Maybe it’s because of the times we’re in, where watching the news is just so depressing that we cling breathlessly to a complete fantasy such as this.  Laugh at me all you want, but don’t knock it until you’ve tried it! I sang that tune and now I not only dragged my husband to opening weekend of the film (he would have happily traded his ticket for a prostate exam and even I agree it was pretty bad) but I am literally counting the days until New Moon comes out. I’ll be the one camped out in line on the sidewalk with a flask of Pinot Noir.

Now to end on a somewhat redeeming design related note, here are some shots of the house used as the Cullen family stomping grounds from the film. A very cool space indeed, and although I don’t show it here, one of the other reasons I loved Edward is because in the movie he has a Barcelona chaise and Sapien bookshelves in his room. Of course, I was the only person in the theater who noted such design elements.  But a vampire with good taste? Could a girl ask for more? ;) 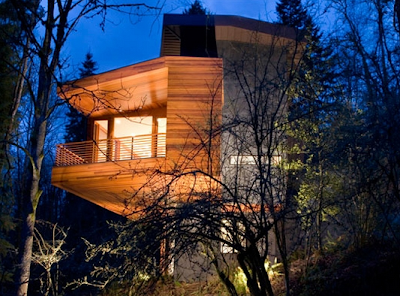 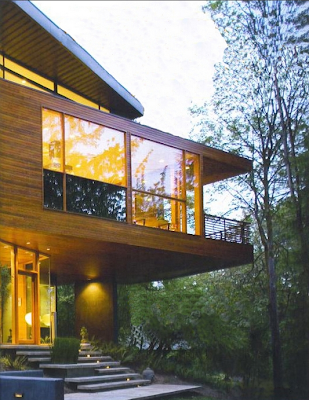 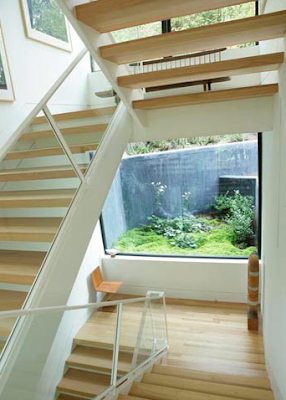 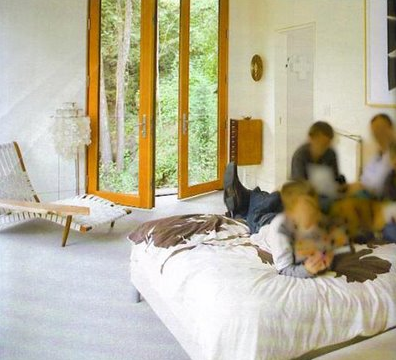