You know how your supposed to “listen to the signs”  and “trust what the universe is telling you?? Wellllllll I have to say I am kinda OK at this life skill and lately I have been getting some HUGE signals about my future. Let me elaborate.

Just a mere 7 months ago I was working from home. The biz was getting larger and I was starting to feel like the girls and myself were HATING coming to work in my tiny home office. One day I randomly drove by this building located in a cute little biz area near my house and saw a “for lease” sign in the window. A quick google search later, I got the deets, called the number, met the agent, and signed a lease!

It was a knee jerk decision but I felt OK about it in my guts , so I threw caution to the wind a within a month we were in and working in our cute new space!

We decided to open up the office by appointment only for anyone that wanted to come by and “Shoppe” everything in person. Because the design office is also the place where we store the pillows and shoppe goodies, I figured it couldn’t hurt to allow anyone local to come visit. Every week we had appointments and I was thrilled and kinda surprised by the overwhelming response.  When the customers come in, it is always fun and I find myself getting super excited to throw some pillow combos together and ignore the mounds of work piled on my desk!  It’s a welcome and much appreciated interruption….but albeit an interruption that took away from all my design clients and ultimately from the daily flow of the major part of my biz. The demand for regular store hours as well as a larger staff was becoming more and more apparent each week we have been in our tiny space. Unfortunately, and to complicate matters even further, they started building a giant restaurant next door to us. Like literally RIGHT NEXT DOOR. For the past 4 months we have been doused in noise pollution, construction dust,banging hammers, buzzing generators, jack hammers, dumpsters, and the occasional nail popping through our walls!!  If I was having a hard time concentrating and being creative before, imagine what adding the chaos of construction has done!!  It was basically the least functional office space one could ever have, and so after much, much deliberation and countless  “pro’s and cons” lists, we have given our notice at the office. This all happened just over a week ago…Friday to be exact, and just like that…we are moving!!

We were lucky enough to already find ourselves another space. Of course the new space has it’s own trippy story behind it, and I think its worth sharing because sometimes the universe shows you things in weird ways. We live in Calabasas CA. and this little city has some pretty adorable little shopping areas, but had a major lack of cute boutique and home goods stores…In fact, I don’t think there are any! So when we first moved to this part of town, almost 2 years ago, we started exploring and seeing the gap in the market. We would eat at this rad little restaurant called Pedalers fork  and go to the farmers market on Saturdays in an area called “Old Town Calabasas”. I remember a specific morning in particular when we parked and walked by this cute great little building and noticed a “for lease” sign in the window. I said to The Duck “I am gonna call and see what the scoop is. How awesome would it be to have this as a little design office/retail space for Shoppe“. So I called, and what do you know…the space had JUST been taken by of all things, an interior designer!!! I was bummed, but honestly still in no financial position to rely on the shoppe being able to pay the rent at this larger space, nor did I have any clue that shoppe would one day actually be able to handle a rent price like that. So I put it out of my mind, but dreamed about it for the past 2 years. Literally every time I would drive by, I would say….” that’s my future space!” Anyways, so after we gave our notice on the friday, we went to the farmers market on that very Saturday and what do you know…….the space was back up for LEASE!!!!!! To make a long story short, the owner had to get out of the 5 year lease for various reasons, and we were able to take over her lease!! We get the keys on May 1st and are hoping to open our doors August 1st.

It will be half part retail and half my design offices, so we have  A LOT of work to be done to make it ready.  I am more excited than I could ever imagine but I am also a barrel of nerves…but good nerves! The excited kind of nerves. Anyways, I will keep everybody posted with plans and “before” pics and mood boards etc. But for now, Here is  at  little pic of the side doors to the building! 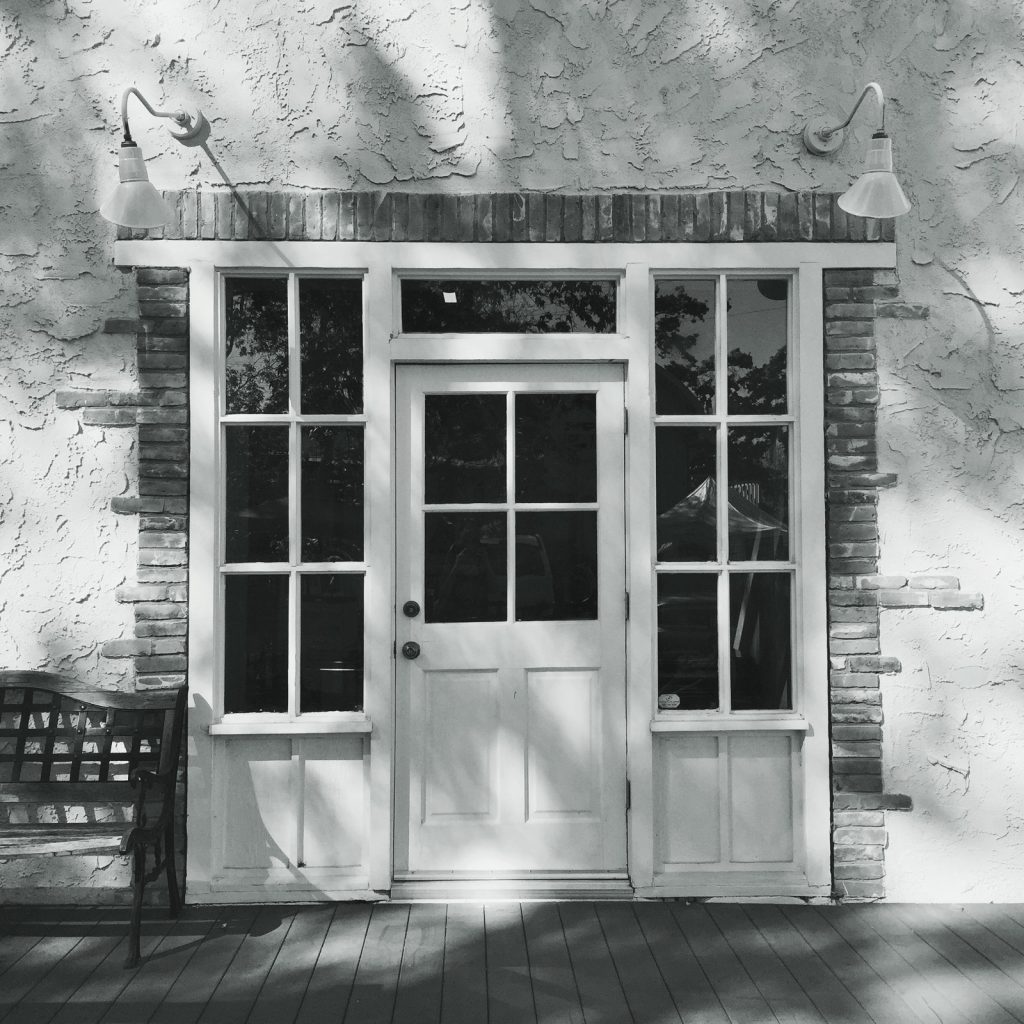