by Amber Lewis on Jan 23, 2012
Good Morning!
Pardon my absence but we had a BLAST at Disneyland.
Me and the Duck decided to cash in on some of our air miles and get  a free night at a hotel right across the street from Disneyland.
Super smart move if you have a little one!
Anyways, We went on a Thursday and had the park practically to ourselves.
The longest we waited in line for a ride was 5 minutes at the Jungle Cruise and no exaggeration we walked straight on to nearly every single ride thereafter…..It was so dead we even got to plunk our butts in a bench to watch the parade.
Unheard OF!
On Friday afternoon we left Disney with huge smiles…….only to come home and Saturday evening G starts complaining and saying her “Tummy Huwts”
Well folks the STOMACH FLU has paid us a visit.
We had a stage five barfer on our hands and it was the saddest thing I have ever had to deal with thus far as a Mommy.
no seriously…
she was so scared and so sad about the barf she just kept saying in the most helpless whimper
“I Sowwy Mama”
over and over again.
not OK
Needless to say I am in Major Mother Cub Mom Mode and must leave you to eye hump this little Splash of Color by yourselves. 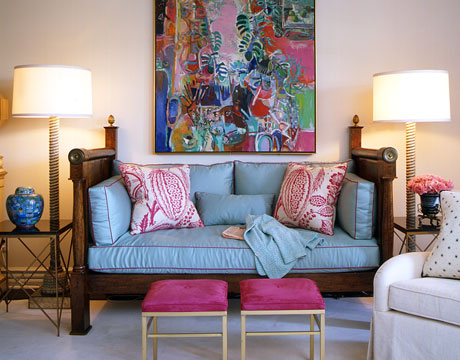 Go check out the rest of the condo on House Beautiful Here
It’s pretty pretty!